Conservation of Wall Paintings in the Valley of the Queens

The Valley of the Queens is mainly associated with one celebrated tomb, that of Queen Nefertari, the favorite wife of Rameses II. This fame is justified by the magnificence of its wall paintings, representing one of the highpoints of New Kingdom art (fig.1). Between 1986 and 1992, these paintings were conserved in a collaborative project of the then Egyptian Antiquities Organization and the Getty Conservation Institute, an undertaking that was pioneering in its scientific and multidisciplinary scope, attracting international attention. 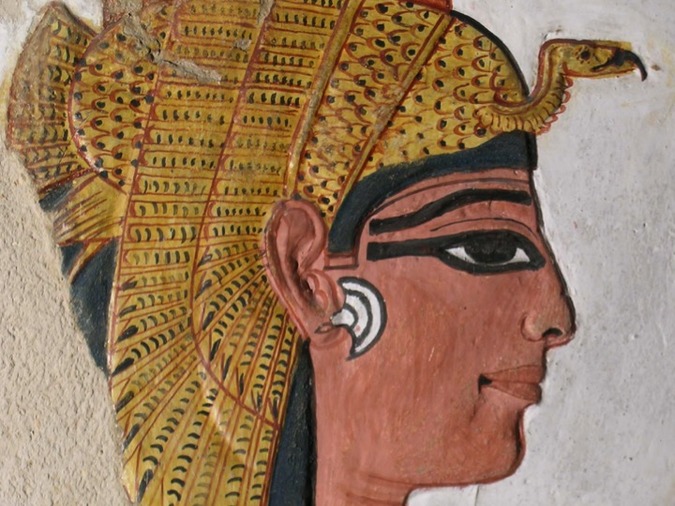 The wider importance of the Valley as the royal necropolis of wives, daughters and sons of the pharaohs during the New Kingdom period – and as a lasting burial site into the Roman period – is often overlooked. Yet more than 100 tombs survive, 22 of which preserve wall painting (figs. 2-3). Of these only 4 are open to visitors, including Nefertari’s, access to which is privileged by its high entrance fee.

This narrow focus has resulted in the neglect of other tombs in the Valley, which have been exposed to a wide variety of natural and human threats over three millennia. These include flood damage, salt deterioration, devastating fires, bat infestations, detrimental reuse and, in more recent times, the irreversible impact of misguided and piecemeal conservation interventions (figs. 4-7).

Of these, periodic flash floods have been most devastating. The tombs of the Valley are cut into marl, a clay-rich limestone. The predominant clay minerals are sepiolite and palygorskite, but high-swelling smectite is also present, which is responsible for the destructive action in tombs affected by flooding. Catastrophic rock collapses have occurred, and the strength and cohesiveness of remaining painted plasters have been weakened (figs. 8-9).

Past efforts at stabilising these plasters have largely failed, stemming from a fundamental misunderstanding of original plaster technology and the consequent use of inappropriate repair materials (fig. 10). 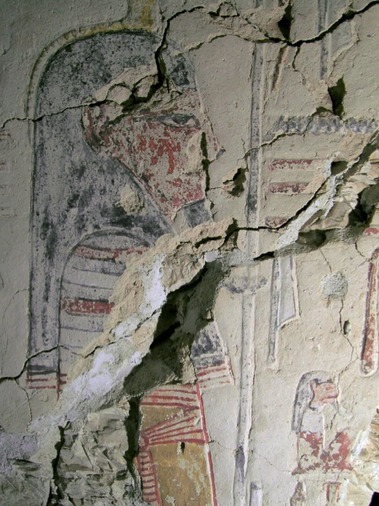 In the 30 years since the Getty Conservation Institute began work at the Tomb of Nefertari, attitudes to site conservation have changed radically. Today the emphasis is on addressing site-wide conservation problems and their causes, rather than focusing on single monuments. In 2006, therefore, the Getty returned to the Valley of the Queens to tackle collectively issues of flood control, site management, tomb protection and wall painting conservation, and to implement associated training of Antiquities inspectors and conservators. An important component of this project was to develop compatible repair materials for Egyptian wall painting plasters. This was addressed through research, training and treatment implementation.

Lime-based repairs are typically used for stabilising Egyptian tomb paintings. Poorly matched to the properties of the original plasters, they contribute to new cracking and loss in the weaker, ancient materials (fig. 10). Previous repair attempts in tombs in the Valley of the Queens illustrate this problem and its damaging consequences, particularly on wall paintings that have been additionally weakened by other events in their physical history, such as fire damage (fig. 11). 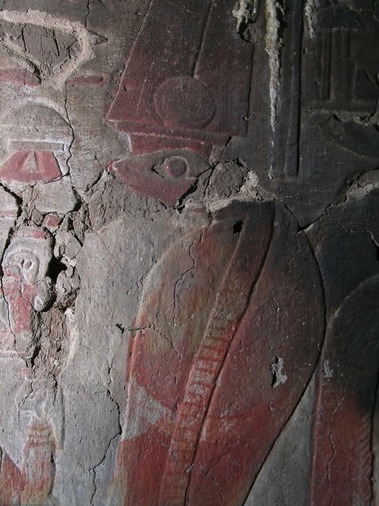 There is no recognition that lime-based repairs were an inappropriate choice in the past, and this practice continues elsewhere, making it an urgent issue to address if the conservation of Theban tomb paintings is to be improved.

The root of the problem is misunderstanding, of both the nature of original Egyptian plasters and principles of compatibility. In the literature, New Kingdom plasters are usually described as being either earth – implying earth derived from alluvial deposits – or gypsum. While both of these plaster types were used, the physical evidence indicates a more complicated situation. A visual study of plasters in Queens Valley tombs shows that they vary greatly in their color, aggregate composition, density and cohesion, and thickness and layering. Plasters and their stratigraphies differ from tomb to tomb, as well as within individual tombs, with variations occurring between walls and ceilings, from wall to wall, and even on the same wall (figs. 12-13). This diversity holds true for other tombs in the Theban area.

Within this varied context, a predominant number of plasters have observable similarities of colour and material composition to indicate a close relationship with the local geology. Indeed, a continuing practice of sourcing raw materials from local clay-containing calcitic deposits to produce plasters known as hib (Arabic: حيبة, hiba) is thought to reflect a tradition surviving from the New Kingdom period (fig. 14). Establishing and understanding the source materials of ancient Egyptian plasters are therefore key factors in being able to formulate compatible materials for their repair. 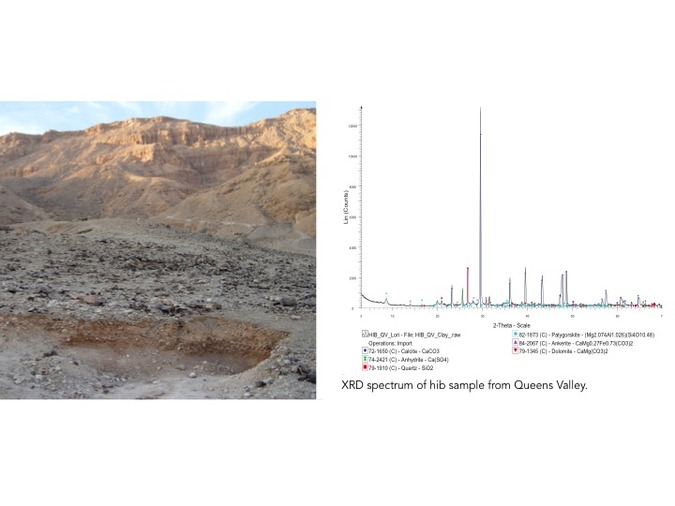 With this purpose, 20 plaster samples were collected for analysis from 8 tombs in the Valley of the Queens, and compared with local hib sources. Preliminary investigations, many of which were carried out in Egypt, included visual observation, microscopic investigation, particle size analysis, bulk and clay X-Ray Diffraction (XRD) and thin-section analysis (fig. 15). Most significantly, a majority of the original plasters showed broad correspondences with hiba samples, indicating that hiba was originally used as a source material. Analytical similarities include high calcium carbonate content, little or no anhydrite or gypsum, and the presence of clay minerals such as palygorskite and sepiolite. 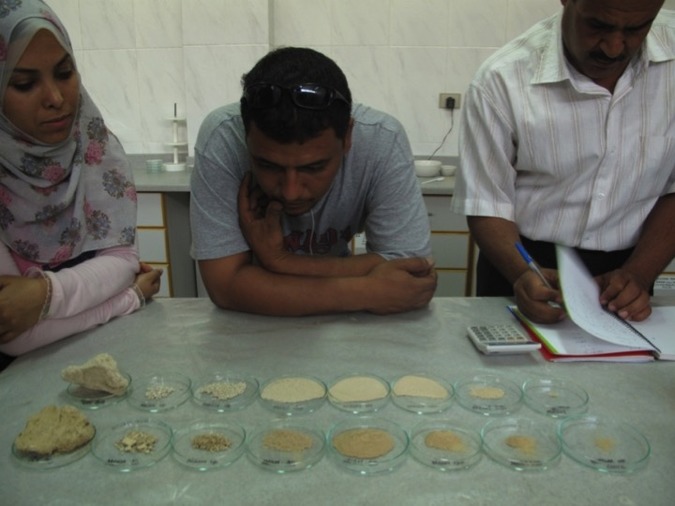 These findings have important implications. Far from being gypsum-based, as usually inferred in the literature, the absence or trace presence of anhydrite or gypsum in most of the analyzed plasters indicates that their binding properties depend mainly on clay reactions (fig 16). The detection of high amounts of calcium carbonate should not be taken as evidence that lime was used as a binder, a misconception that goes some way to explaining the inappropriate use of lime for repairing Egyptian tomb paintings. Rather, calcium carbonate is present as an aggregate, as was found in the hiba samples. In soil chemistry, however, calcite-clay reactions have an important function in stabilizing clay-swelling reactions; the high calcium carbonate content of the Queens Valley plasters may be regarded as having this role too. 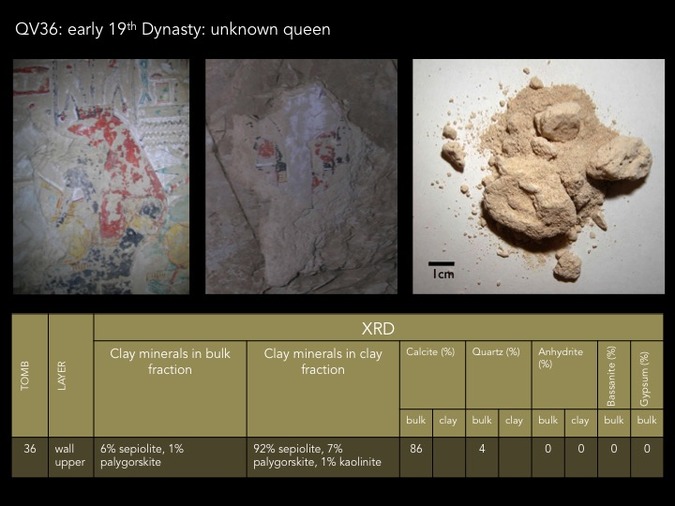 A number of analytical limitations need to be highlighted. The hiba from which Egyptian plasters were made can be classed as an earth, formed by geological weathering. Earth is composed of particles ranging from clays and silts in the finer fraction to sand, gravel and cobbles in the coarser fraction. Analytical detection of clay minerals is difficult, complicating the task of accurately defining the binding reactions of Egyptian plasters. A further complication is that the hiba source materials contain minerals that, when mixed into a plaster, may contribute to binding reactions and/or perform an aggregate function. Distinguishing one role from the other is sometimes not possible.

Nevertheless, Hiba can be identified as the natural base material for New Kingdom plasters in the Theban area. As such, its use as a repair material has several advantages. Most importantly, in sharing geological properties with Theban plasters it is a compatible choice, a defining principle of conservation practice. Generally, it can also be shown to have good performance characteristics, another key conservation requirement. Findings of the preliminary investigations therefore helped in the formulation of hiba-based repairs for the stabilization treatment of vulnerable plasters in the Queens Valley tombs (fig. 17). 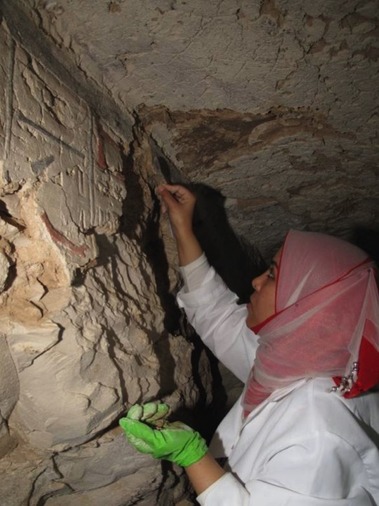 Some issues remain to be addressed. Despite broad similarities, hiba locations vary in their mineralogical composition, which could influence repair plaster behavior. There is also the problem of matching repairs to original plasters that, as already mentioned, differ in their aggregate-binder types and combinations. For example, a small number of the analyzed Queens Valley plasters showed significant anhydrite content, indicating that these probably had gypsum intentionally added to improve their setting reactions. These examples included ceiling plasters, where a faster rate of set would have been a desirable property. Clearly, then, the ancient craftsmen were aware of the properties different materials could promote in their plasters, leading to a wide variety of types that were formulated for different purposes.

Further research has therefore been carried out on an expanded sample set to address these issues. Analysis and testing focused on the behavioural properties of hibas, including their responses to water, and performance criteria such as compressive strength, water vapor permeability and porosity. Knowing that opportunities for analysis of Egyptian plasters are rare, and that on-site resources for developing compatible repair plasters can be scarce, the principal aim is to develop an accessible repair methodology. It is anticipated that this will include guidelines and basic field-tests to aid the selection and formulation of hibas as compatible repair materials; publication of the research is also planned. It is hoped that this will provide a benchmark for improving the conservation of tomb paintings in the Theban area.

The work presented here is one component of the Conservation and Management of the Valley of the Queens project at the Getty Conservation Institute under the direction of Neville Agnew and Martha Demas. Particular thanks are also due to our dedicated team of Luxor-based SCA conservators, to Hamza Associates for undertaking the analyses as well as to GCI scientist Beril Bicer-Simsir and conservator Jennifer Porter who performed the soil testing.

Fig. 1: portrait detail of Queen Nefertari, the favorite wife of Rameses II, from her tomb in the Valley of the Queens (QV 66).
Fig. 2: view of the Valley of the Queens, the royal necropolis of wives, daughters and sons of the pharaohs during the New Kingdom period, and a lasting burial site into the Roman period.
Fig 3: more than 100 tombs survive in the Valley of the Queens, 22 of which preserve wall painting Of these only 4 are open to visitors, including Nefertari’s.
Fig 4: severe salt deterioration in the tomb of Nefertari (QV 66), before its conservation.
Fig 5: devastating fire damage in the 19th Dynasty tomb of Bentanat (QV 71).
Fig 6: damage from bat infestation in the 20th Dynasty tomb of Parcherunemef and Minefer (QV 42).
Fig 7: the irreversible impact of misguided and damaging cleaning in the 20th Dynasty tomb of Sethherikhepshef (QV 43).
Fig 8: periodic flash floods have had a devastating effect on the clay-rich limestone geology of the tombs, leading to catastrophic rock collapses, such as shown here in the 19th Dynasty tomb of Nebattauy (QV 60).
Fig 9: the strength and cohesiveness of painted plasters have been weakened by clay-swelling reactions in the bedrock, as shown in this detail from QV 60.
Fig 10: lime-based repairs have been used for stabilising tomb paintings. Poorly matched to the original plasters, these contribute to new cracking and loss in the weaker, ancient materials.
Fig 11: use of inappropriate repair materials has particularly damaging consequences for wall paintings that have been also weakened by other events in their physical history, such as fire damage.
Fig 12: plasters in Queens Valley tombs vary greatly in their color, aggregate composition, density and cohesion, and thickness and layering. In QV 36, for example, the early 19th Dynasty of an unknown queen, the ceiling plaster comprises a thick straw-containing lower plaster, with a thinner upper plaster, lighter in color and without straw. Plastering on the walls differs in its composition and layering.
Fig 13: plasters and their stratigraphies differ from tomb to tomb, as well as within individual tombs, with variations occurring between walls and ceilings, from wall to wall, and even on the same wall, as these example from QV 60 illustrate.
Fig 14: local clay-containing calcitic deposits produce plasters known as hib (Arabic: حيبة, hiba) (left). X-Ray Diffraction (XRD) analysis indicates that such sources are characterized by high calcium carbonate content, little or no anhydrite or gypsum, and the presence of clay minerals such as palygorskite and sepiolite (right).
Fig 15: 20 plaster samples were collected for analysis from 8 tombs in the Valley of the Queens, and compared with local hib sources. Here, SCA conservators Afaf Mohamed Mahoud, Ramadan Mohammed Salem Bedair and Badawy Sayed Abdel Rheem carry out preliminary particle size analysis.
Fig 16: results indicated that a majority of the analyzed original plasters were derived from hiba. The absence or trace presence of anhydrite or gypsum, such as in this example from QV 36, indicates that binding properties depend mainly on clay reactions.
Fig 17: findings of the investigations helped in the formulation of hiba-based repairs for the stabilization of vulnerable plasters in the Queens Valley tombs. Here, SCA conservator Afaf Mohamed Mahoud repairs wall painting in QV 60.