The conference “Doing Science: Texts, Patterns, Practices” took place 20-21 November 2015 as a cooperation between Julia Hoydis from the Department of English and Nina Engelhardt from the Research Lab of the a.r.t.e.s. Graduate School of the Humanities Cologne. Over the two days, we focused on intersections and interrelations of science and literature broadly conceived. The interdisciplinary orientation tied in with the work of the 2015 Albertus Magnus-Professor Bruno Latour, who gave two public lectures and one seminar, as well as a graduate seminar for researchers at a.r.t.e.s., earlier in 2015. Latour’s work provided a touch point to explore the conference keywords “doing science” and “texts”, “patterns”, and “practices”. We particularly followed up on impulses of Latour’s thinking that move scientific practice and its interrelations with texts into critical focus and, drawing on Gillian Beer’s seminal work in the field of literature and science studies, we called for taking account of the “two-way traffic” between the disciplines.

Scholars from Germany, Denmark, Poland, Spain, Portugal, and Great Britain followed this call and presented research ranging from medical studies and history of science to theatre studies, art history, and literary and science studies. The diverse disciplinary perspectives in the group greatly contributed to the engaging discussions and invigorating debates and also to lively informal exchange over coffee and dinner. The rallying points given by the focus on “doing science” and the terms “texts”, “patterns”, “practices” made sure that disciplinary variety did not lead to a dispersal of the discussion but illuminated a common complex of questions from various perspectives. 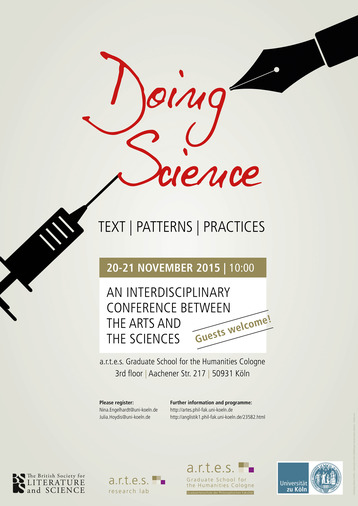 On the first day, Professor Norbert Schaffeld from the University of Bremen gave a deeper insight into the narrative of emergent scientific discourse and the historical science novel in a talk that both provided the participants with a common point of reference and sparked critical discussion. In the panel on inter-actions between the sciences and the arts, Oliver Hochadel focused on the relationship between paleoanthropological research and paleofiction from the perspective of a historian of science. Julia Boll reported from the “field”, reflecting on an experimental lecture series in 2015. Based on her experience of holding lectures in dialogue between a literature/theatre scholar and a scientist with performers and dancers, Boll examined more general questions about the nature of the stage as a laboratory and of the usability of theatre to think through notions of the experimental and reassess conceptions of scientific facts and scientific evidence. In a session on mediating science, Kanta Dihal presented her research on scientific conflict in astrophysics popularisations, while a.r.t.e.s. doctoral student Moritz Ingwersen explored the trickster figure as a mediator in the science fiction by writer Neal Stephenson and the science philosophy of Michel Serres. A panel on literature, featuring talks by Harald Pittel on the evolution of an ethic of science with a focus on Oscar Wilde’s “The Picture of Dorian Gray”, and Maxim Shadurski on Huxley’s eugenics in “Brave New World”, closed the first day and gave participants food for thought until we met in an Italian restaurant to continue the conversation over dinner.

Day 2 began with talks by two doctoral students from the English Department at the University of Cologne. Anna Rasokat spoke on Graham Greene’s imagining of leprosy, and Pia Heidemeier gave a presentation on genetically modified food in Margaret Atwood’s “Oryx and Crake”, discussing implications for the conceptualisations of posthuman identities and ethics. The final panel featured three talks with a historical perspective, not least by Adi Efal from the a.r.t.e.s. Research Lab. She focused on the “birth of science” in the seventeenth century and explored the role of figures and figuration in Descartes’s construction of scientific method, addressing questions as to the relation of the figure to imagination and to physical reality, as well as the limits of figural knowledge. The introduction of these key terms and categories opened up avenues of discussion with the two final talks. Laura Søvsø Thomasen presented her research at the intersection of the fields of literature and science and of visual culture of science with an exploration of the visual and textual strategies in works by Alexander von Humboldt and Erasmus Darwin. Ana Duarte Rodrigues reported on a recent project aimed at increasing sustainability and heritage identity of Algarvean gardens by recovering practices found in historical texts and traditional sources. She addressed the project’s negotiations of demands and expectations of diverse stakeholders and its conscious use of historical text and tradition to popularise its aims. This last paper opened up a broader discussion on the ethical dimension in doings of science as well as in the doings of interdisciplinary research that may yield practical recommendations and consequences.

All speakers participated in a final roundtable discussion where we specifically addressed questions of interdisciplinarity, disciplinary preconceptualisations, and challenges in communicating across disciplines. The final session helped identify tacit disciplinary assumptions and styles of reasoning that surfaced during the conference and have to explicitly be addressed to ensure fruitful communication and constructive dialogue between disciplines. In this very productive summarising discussion, we identified common topics of interest, overlapping thematic and methodological concerns, and explored possibilities of determining and strengthening focal points across disciplinary boundaries. The roundtable-discussion brought to a close two days of productive and stimulating debate.

We thank all participants for a very fruitful and pleasant two days and look forward to their contributions in the special issue 42.3 (September 2017) of the journal “Interdisciplinary Science Reviews”.