Remaking the Rhythms of Life: German Communities in the Age of the Nation-State

Across Europe the late nineteenth century marked a period of rapid economic change, increased migration, religious conflict, and inter-state competition. In Germany, these developments were further accentuated by the creation of the imperial state in 1870-71 and the conflicting hopes and expectations it provoked. Attempting to make sense of this turbulent period of German history, historians have frequently reverted to terms such as industrialization, urbanization, nation-formation, modernity or modernization. Using the prism of comparative urban history, Oliver Zimmer highlights the limitations of these conceptual abstractions and challenges the separation of local and national approaches to the past. He shows how men and women drew on their creative energies to instigate change at various levels. Focusing on conflicts over the local economy, elementary schools, as well as on nationalist and religious processions, Remaking the Rhythms of Life examines how urban residents sought to regain a sense of place in a changing world: less by resisting the novel than by reconfiguring their environments in ways that reflected their sensibilities and aspirations; less by lamenting the decline of civic virtues than by creating surroundings that proved sufficiently meaningful to sustain lives. In their capacity as consumers or citizens, members of religious or economic associations, people embarked on a multitude of journeys. As they did, larger phenomena such as religion, nationalism and the state became intertwined with their everyday affairs and concerns. 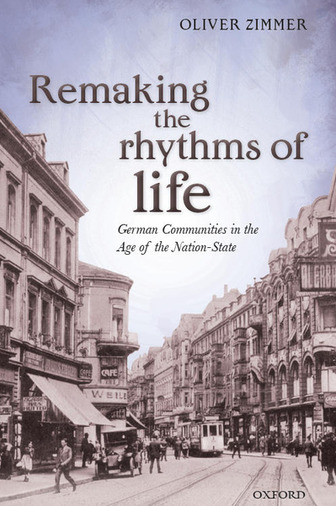 REMAKING THE RHYTHMS OF LIFE: German Communities in the Age of the Nation-State (Oxford University Press)