"It is possible to have a dialog of alternative ideas"

Interview with James K. Galbraith on the current economic crisis

The US-American economist Prof. Dr. James K. Galbraith of the University of Texas at Austin belongs in the United States to the proponents of a direction change in economic and financial politics. In his latest books he argues for a rediscovery of the British economist John Maynard Keynes, who pleads for more governmental steering of the economy. We asked James K. Galbraith our questions. 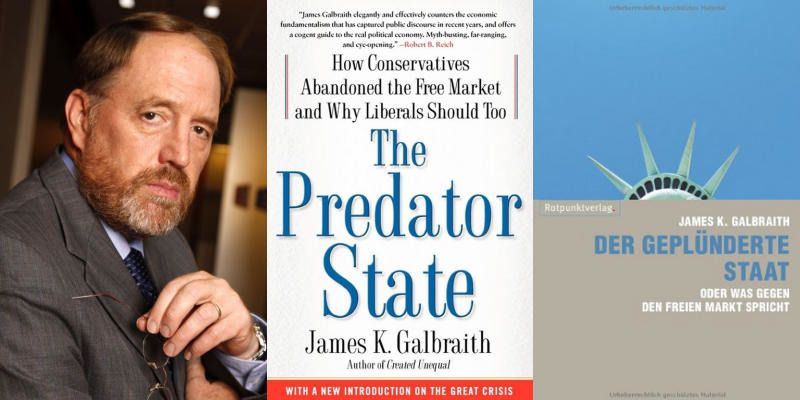 L.I.S.A.: Professor Galbraith, in your recent publications, "The Predator State", "Inequality and Instability" and "The End of Normal", you focus on current economic policies and their historical roots. You argue that the state has become the prey of a small elite. What exactly do you mean by that?

Prof. Galbraith: This is the theme of "The Predator State", not so much of the other books. It has been a feature of American politics for a generation that the institutions created to provide broad social welfare have become the targets of financial and other elites, who see multiple prospects for self-enrichment. It is the principle of war profiteering, but applied in this case to the peacetime functions of the modern state. Nor is the US case unique, but I am not so familiar with the specific instances and details in Europe.

L.I.S.A.: Your research shows that the destruction of the Bretton Woods system, when currencies were still bound to the gold standard and fixed exchange rates were agreed, spelled the dawn of a new economic era. What was the role of the economic science during this paradigm shift? Did John Maynard Keynes replace Milton Friedman?

Prof. Galbraith: The Bretton Woods system was not a gold standard, but a gold-exchange standard, with fixed-but-adjustable exchange rates tied to the dollar. This system was created by John Maynard Keynes and the American Harry Dexter White at the 1944 Bretton Woods conference in New Hampshire. The move to flexible exchange rates in 1973 was a case of Friedman replacing Keynes.

"Aftermath of the crisis has unnecessarily impoverished millions"

L.I.S.A.: In spite of the criticism of the crisis-hit prevailing economical system, advocates of this system argue that from a global point of view, humankind has become wealthier and the life expectancy has constantly increased. Is it working better than perhaps one thinks?

Prof. Galbraith: No. There is nothing to be said for the waves of financial fraud that swept over the developed world in the run-up to the crisis, and whose aftermath has unnecessarily impoverished millions, especially among low-income communities in the United States and on the periphery of Europe. A visit to Cleveland, or to Athens, will persuade any sensible person of this.

L.I.S.A.: How do the people of the United States judge the European policy to deal with the financial and debt crises? The U.S. government has reacted in the Keynesian way with massive deficit spending measures, while European governments have chosen austerity ones. How can the shift in the economic policies on both sides of the Atlantic be explained?

Prof. Galbraith: The main difference lies in the fact that the dominant US social institutions remain those created during the New Deal and the Great Society -- Social Security, Unemployment Insurance, Medicare, Medicaid, Food Stamps -- which have a powerful stabilizing effect. In Europe the continental-level institutions were created in the age of neoliberal economics, they lack continental-level stabilizers, and so they are destabilizing in the face of crisis. Differences of current policy ideas are also present but they are less important than this fundamental difference in institutions.

"A practical approach to many specific issues"

L.I.S.A.: Within the faculities of economic science, especially in the United States, rethinking of economic policies has arisen: a dismissal of the neo-liberal dogma of free markets and deregulated states. Whereas the public perception and the governmental measures are still dominated by a pattern of supply oriented economic policies. Why is there such a difference and therefore which role does the media play?

Prof. Galbraith: I don't believe that any major economics faculty in the US has changed its orientation since the crisis; so far as I know not a single pre-crisis dissident has been offered a senior post in economics at Harvard, Yale, Princeton, Berkeley, Stanford or Chicago, to name just a few. However, the US does have re-thinkers in positions in state universities and in many liberal arts colleges, and so it is possible to have a dialog of alternative ideas in this country. More generally, in the US we have a dominant free market ideology, but a practical approach to many specific issues; notice for instance the move to a $15/hr minimum wage, just adopted in Los Angeles. The ideology is not taken too seriously when any practical matter is at stake.

My sense is that in parts of Europe there is a strong tendency to translate ideological stance into practice, and this generally produces trouble. As Emerson said, "A foolish consistency is the hobgoblin of little minds, adored by little statesmen and philosophers and divines."