Digitised History of the Topovske Šupe Concentration Camp: a Project of the Centre for Public History, Belgrade

Mapping the Holocaust – The Preservation of the Topovske Šupe Camp is a scientific-research project implemented by the Centre for Public History which aims at presenting the history of the Topovske Šupe concentration camp to the public. In order to permanently preserve the memory of the concentration camp and its victims, the project team is carring out a historical research of the Topovske Šupe, map the location and document it present state. This includes collecting archival and other documentation in Serbia and in Germany, taking testimonies, developing an inmate database, and publishing the research results on the website. In order to raise awareness among the general population in Serbia and the international community, the project team plans to launch a public campaign to advocate the preservation of the concentration camp’s original buildings from destruction as the first step in transforming them into a developing a permanent memorial of the Topovske Šupe. All the project’s results are presented on the web platform and are available to the general public in Serbian and in English. 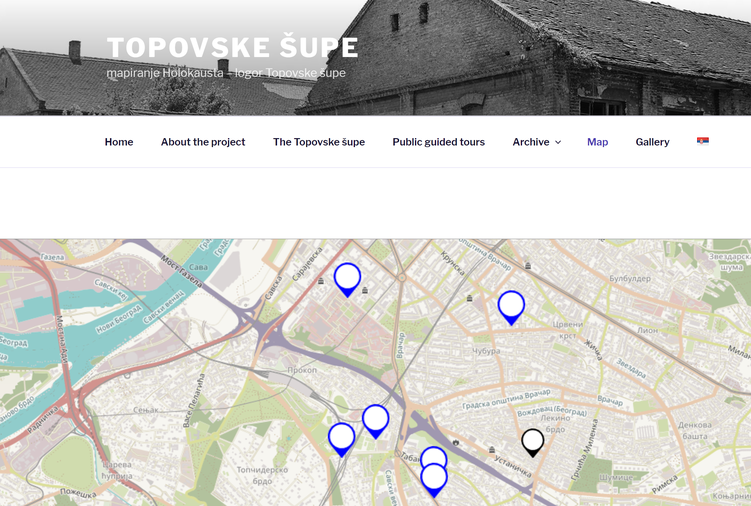 The Topovske Šupe camp for Jews and Roma operated close to the very centre of Belgrade between August and November 1941. Its first prisoners were Jewish men from Banat who had been banished from that region to Belgrade with their families by the local Germans (the Volksdeutsche); they were followed by all Jewish men from Belgrade and, in the end, Roma men, also from Belgrade. All of them, with rare exceptions, were killed in mass shootings in the autumn of 1941, mainly at the site of Jabuka near Pančevo. According to the available estimates, about 5,000 Jews and 1,500 Roma passed through it. Very little is known today about the Topovske Šupe camp. The location of the Topovske Šupe camp is now forgotten, derelict and unknown to the general public. There is an imminent danger that the buildings which were part of the camp will be destroyed due to the announced construction of a shopping mall. After the commemorative plaque put up by the Federation of Jewish Communities of Serbia in 2018. was stolen, representatives of the Belgrade Jewish Community unveiled a new memorial plaque to commemorate the Day of Remembrance and Courage on May 2nd, 2019.