Amon Mwine | "Promoters of Gender Equality? A Study of the Social Construction of Specific Male Parliamentarians as “Male Champions” in Uganda"

This week, we welcome Amon Mwine from Uganda. After graduating from the Makerere University, he started his PhD in Sociology with the thesis Promoters of Gender Equality? A Study of the Social Construction of Specific Male Parliamentarians as “Male Champions” in Uganda at Stellenbosch University in 2016. 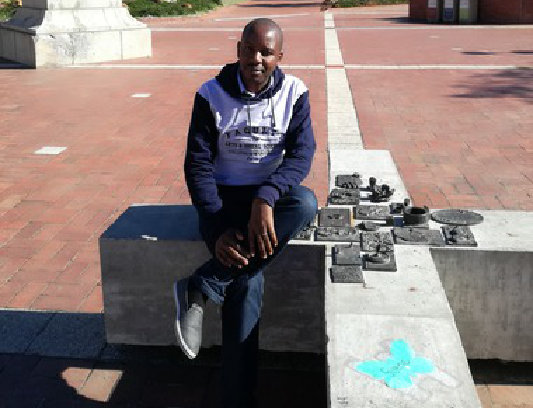 "Accord primacy to science disciplines while negating the humanities"

L.I.S.A.: Amon Mwine, what is the status of the humanities in Uganda, your home country?

Amon Mwine: Very recently, as recent as the International Labor Day celebrated on May 1st 2018, the president of Uganda is quoted by the media justifying increased pay of science-oriented civil servants in contrast to their humanities-based counterparts. The president said: “If the History teacher goes away from school, it may be easier to replace him. But if it is a science teacher, it is difficult to replace them. In terms of retention, we are more desperate to retain science teachers” (Kiiza, 2018). Such utterances from the person of the president, on an International day to promote the rights and welfare of workers highlight Uganda’s political commitment to humanities and social scientists. The president’s comments, which are not new, may be seen to accord primacy to science disciplines while negating the humanities.

Despite these divisive political commitments, the humanities and social sciences remain a vibrant discipline, attracting vast numbers of learners in institutions of higher learning in Uganda. In particular, Makerere University’s student population in any single intake over the years has been predominantly from the humanities. As a graduate of Humanities and Social Sciences at Makerere University at both the undergraduate and graduate level, I felt the university offers a wide variety of humanities courses, with students allowed to take course units from different subjects to widen their exposure to different disciplines. The humanities and social sciences also boast of skilled human resources in terms of academic staff, with a sizable share of professors and senior academics for inspiration and mentorship of youths graduating from their courses.

L.I.S.A.: What has your experience at Stellenbosch University been like? Have there been any differences to the Makerere University?

Amon Mwine: For the time I have been at Stellenbosch University, I have noted an interesting inter-disciplinary relationship both in students’ research projects but also departmental activities such as seminars, reading groups and training work among other things. There is more interaction across departments with students drawing on theoretical and methodological resources from different humanities, something that I did not experience regularly at Makerere University. At times, departments may be closed off, with limited inter-disciplinary staff and students’ interactions. I think my pronounced experience of this inter-disciplinary approach is accentuated by Stellenbosch Graduate School’s admission and handling of students from different disciplines as a cohort. Consequently, I have had an opportunity to regularly read and write with, discuss and attend seminars with people from different academic departments. This widens one’s theoretical and methodological understanding of research. You get to learn blended intellectual insights from different disciplines and this has been helpful on my PhD research project.

"We were often ridiculed by other students"

Amon Mwine: My research is on the male promoters of gender equality – male legislators who are ‘selected’ by women rights activists to speak to gender issues on behalf of women – in the context of the Ugandan parliament. I enquire into who these men are, and why women opt for male representation on gender equity issues in parliamentary debates. I also interrogate cases in which some of these men supportive of gender equality are constituted as ‘champions’.

My interest in researching male actors in gender debates in parliament is motivated, in part, by my past experience as a male undergraduate student taking a course on Gender and Development at Makerere University, Uganda. A critical question that I and indeed other male Gender students were constantly asked was – “how, for God’s sake, do you ‘do Gender’ [take gender studies], when you are a man?” We were often ridiculed by other students who sometimes inferred that our desire to do gender studies was influenced by sexual motivations ‘to do women’. In my local Bantu speaking language – Luganda “doing women” is loosely translated as “Nkola Bakazi” equivalent to saying, “having sex with women” or “fucking women”. This kind of ridicule of men studying Gender and Development courses was not confined to the university. I encountered similar attitudes in a remote village - approximately 280 Kilometres away from Kampala where Makerere University is located. During the break from my second semester, a certain elderly man asked me what I was studying at the university. In our conversation, I proudly shared with him how I had been offered a course on Gender Studies and how I was being sponsored by the government of Uganda. He later told me how disappointed he was, that I could “waste” such an opportunity of going to a university in the city, only to spend taxpayers’ money on studying women.

While these are two separate incidences located in different times and social spaces, the questions raised in each of these are posed in a way that queried my masculinity as if ‘gender’ was synonymous with femininity, and as a man, learning Gender Studies was violating what is meant to be a man. Meanwhile, all this was happening in 2001 when development discourses had already embraced Gender and Development (GAD), “an approach that sought to tackle women's subordination through an explicit emphasis on socially and historically constructed relations” (Cornwall, 2000: 18).

So, I wanted to interrogate the kind of discourses that produce the ways in which men are constituted in gender equality debates. I wanted to work towards developing feminist politics which engage critically with women’s oppression in ways which do not reproduce men and women as binary opposites, as perpetrators and victims in relation to patriarchal power.

Amon Mwine: I look forward to returning to teaching. The project, which is in its last stages - thanks to Lisa Maskell Fellowship, the Stellenbosch University’s Graduate School and my supervisor, Rob Pattman – has exciting findings especially in the area of sociological ways of doing research and critical reflections on the question of men and masculinities in gender equality debates. The field of critical masculinity studies is one that started only recently at Makerere University and I look forward to contributing in this area through research and teaching. Additionally, there is a lot going on globally around engaging men and boys in gender equity initiatives especially combating Gender Based Violence. I hope my research findings will contribute to these debates in Uganda and beyond.

Amon Mwine has answered the questions in written form.