Zaid Sekito | "Beyond Islamic Fundamentalism: A History of Terrorism in Uganda 1976-2015"

This week, we welcome Zaid Sekito from Uganda. After graduating from Makerere University in Uganda, he started his PhD in History with the thesis Beyond Islamic Fundamentalism: A History of Terrorism in Uganda 1976-2015 at Makerere in 2017. 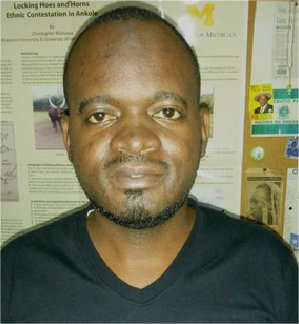 "The humanities remain by far the most powerful instrument in Uganda"

L.I.S.A.: What is the status of the humanities in Uganda, your home country?

Zaid Sekito: Despite operating from a complicated environment characterized by disruptions, globalization and neoliberalism where even the Ugandan government is against the funding of the humanities and social sciences, the humanities remain by far the most powerful instrument in Uganda. This is in regard to knowledge production in an attempt to provide solutions to societal problems. The humanities have the biggest number of scholars in Uganda whose works have had a profound impact on Ugandans in particular and Africans in general. For example, professor Mahmood Mamdani tremendous work of African political thought by focusing on decolonization. Another influential person from the humanities is Prof Sylivia Tamale whose work on feminism has theorized African sexuality; Augustus Nuwagaba who professed important truths on poverty only to come true; as well as the ideas of many other professors like Edward Kirumira and Ali Mazrui among others. The influence of humanistic ideas has also been manifested in the revolutionary work of President Yoweri Museveni, a former student of Walter Rodney in Dar es Salaam, relied on the ideas of Fanon (Fanonian Theory of revolution) to launch a protracted war between 1981-1986 that brought him to power.

Therefore, the status of humanities in Uganda is very good bearing in mind the traditional role of African humanities scholars (some few mentioned above) in shaping the public intellectuals as either persons who are fascinated with their ideas or as a person who relies on the humanities to solve societal problems by providing insights, or solutions. For example, there is a death of literature on why terrorism has persisted in Uganda despite the numerous counter-terrorism measures in place and Uganda being at the helm in the fight against terrorism in Eastern Africa. Using my study based in the humanities, answers will be provided to what terrorism is in the context of Uganda, how it has manifested itself, how it has been countered and above all why it has persisted despite those measures. The answers to such a societal problems can only come from the humanities.

Zaid Sekito: Yes, such as: Financial constraints; at the moment, for example, I am working on a very sensitive area (terrorism) that concerns all of us and I would expect it to attract funding from many agencies including research funding, but I haven‘t gotten any. My funders (Gerda-Henkel Foundation) cater for my tuition and stipend but not research which is very critical.

Another problem is limited access to current/most recent publications (books, articles, etc) due to low levels of technology, failure of the institution to subscribe to various journals among other things. This problem is made worse by the financial constraints.

Furthermore, policy challenges with which the Ugandan government has wished to have both the humanities and social sciences scraped off the university curriculum on several occasions. Consequently, this has always thrown me into a state of dissonance and fluctuating morale. As a student of the humanities, I cannot fail to point out that the humanities are facing incredible pressure from the sciences, technology, engineering and mathematics as well as vocational studies. These disciplines have had an explicit trajectory of return on investment in education while the humanities have been labelled useless. Funding as well as numbers have been reduced, thus facing an existential threat. This problem affects me both as a student and lecturer of the humanities. Additionally, my research area is sensitive given the way the government has been handling and/or enforcing its counter-terrorism measures which in the end has turned into an instrument of terrorism itself. Therefore, research on areas that can expose the position or hand of government in terrorizing its own people is not being perceived well from the government side.

"Human rights violations accruing from the fight against terrorism"

Zaid Sekito: My PhD project is about the phenomenon of terrorism in Uganda. What got me interested in this topic was:

L.I.S.A.: What has your experience at Makerere University been like? Have there been any differences to other institutions you have previously attended?

Zaid Sekito: My experience at Makerere University has been good. Unfortunately, I have never attended any other institution apart from reading about them and sharing experiences with my colleagues. I cannot, therefore, make any comparison. But since I am on the Gerda Henkel fellowship, I would love to be given an opportunity to visit Stellenbosch and other universities, if possible, which enjoy the Gerda Henkel funding so that I can be able to compare the two.

"Several opportunities if one pursues M.A & PhD degrees [...] because the level of illiteracy is still high"

L.I.S.A.: What are the opportunities in Uganda to pursue different degree options (BA/MA/PhD)?

Zaid Sekito: There are several opportunities especially if one pursues M.A & PhD degrees. This is because the level of illiteracy is still high (about 40% - Uganda is at the bottom of East African Region in literacy). Therefore, despite the roaming corruption in the form of tribalism for example, opportunities relating to lecturing, consultancy and NGO employment as resource personnel in the field of terrorism or violence or peace and security related matters can be available.

Zaid Sekito: My plans after obtaining my PhD are: Publishing more works in order to excel in my field (knowledge production for example theorizing terrorism depending on the African or Ugandan context in particular); becoming a professor and mentoring other students in the field of terrorism. Because of the lack of funding on the side of the humanities, it will be hard to run an institution without both legislative will and external help. Therefore, I intend to lobby through propaganda so that the legislators can change their attitude towards the humanities. And to advance the cause of living in a terrorist free society through the education mechanism, I hope to solicit for funds from the well-wishers, internally and externally (fundraising and donations - in monetary terms, computers, and other scholastic materials). Through the solicited donations, this non-profit institute on terrorism studies will be able to run.

Zaid Sekito has answered the questions in written form.