The Waqf of Ibshir Mustafa Pasha

The northern suburb of Aleppo “Outside al-Nasr Gate”, Kharij Bab al-Nasr, started to flourish in the late Mamluk period (9th – early 10th century AH / 15th – early 16th century AD) and continued to do so in the first centuries of Ottoman rule (from the 10th century AH / 16th century AD onwards). Already in late Mamluk times, its western part, called al-Judayda (“the little new one”), was home to most of the city’s Christian population and their churches; some of these churches witnessed substantial (re-)construction activities during the second half of the 9th century AH / 15th century AD. Important infrastructure projects were realised in the last decades of Mamluk rule, notably the water pipe that connected the northern suburb to Aleppo’s water supply (Qanat Halab). Along the new water pipe, a wave of construction activities involving mosques and public fountains could be observed from around 895 AH / 1490 AD onwards.

It is not entirely clear when the Christians of Aleppo started to predominantly live in the northern neighbourhoods extra muros, “outside the city walls”. During the Ottoman period, a vast majority of Aleppo’s different Christian communities lived in this part of the city, which stretched from al-Judayda quarter with its churches in the west to the main northbound thoroughfare in the east that started at Bab al-Hadid, the northeastern gate of the walled city. Al-Judayda, the western quarter, may have received a boost in its development during the 9th century AH / 15th century AD, as we can trace the foundation or reconstruction of Christian churches to this period. The center of this quarter is usually called “Bahat al-Kanaʾis” (“Churches Yard”), because the old churches – probably very modest structures – were assembled around a yard.

One can question if this situation resulted from random urban development or (more probably) a well-planned urban project: A few decades later, after the Ottoman conquest in 922 AH / 1516 AD, parts of al-Judayda and neighbouring Zuqaq al-Arabaʿin were subject to a central organized plan, as was argued based on its regular street pattern.[1] Unfortunately, written sources do not tell us anything about the exact circumstances, but the fact that the churches were constructed on land belonging to only one owner, the charitable endowment (waqf) of the Madrasa al-Halawiyya, is one indication of this (cf. Umayyad Mosque). Among the waqf property of this madrasa (Islamic college) was extensive land: entire neighbourhoods in the northwestern suburbs and land outside these neighbourhoods, beside others.[2] The madrasa received payments for the ground rent from owners of the buildings and other endowments (awqaf) in that area. For example, in 1219 AH / 1804–05 AD, the account of the Maronite Christian community’s waqf lists 14 piasters payable to the waqf of the Madrasa al-Halawiyya and the Suriyan (Syrian Orthodox) community paid 7 piasters for candles for the madrasa.[3] The waqf of Ibshir Mustafa Pasha equally paid the ground rent to the Halawiyya, altogether 6 piasters in the year 1222 AH /1807–08 AD.[4] 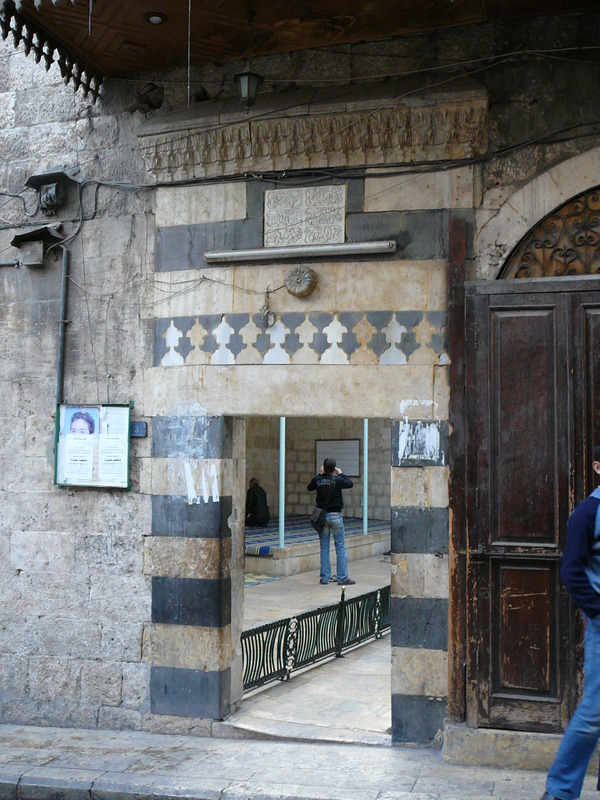 The already mentioned developments upgraded the northern suburb and laid the ground for the single most important intervention into its urban infrastructure in the 11th century AH / 17th century AD: the waqf or endowment of Ibshir Mustafa Pasha, who was governor of Aleppo in 1062 AH / 1652 AD. His position as governor of that prestigious province was an important step in his career, which eventually led to him being nominated grand vizier and the hand of Sultan Ibrahim’s daughter while he was in Aleppo. However, shortly after his arrival in the capital Istanbul, he was executed, probably because of his involvement with rebel factions in Anatolia.

His waqf, registered in 1063 AH / 1653 AD, included the restoration of a caravanserai in the village of Khan Tuman, a few kilometres south of Aleppo, and the construction of the monumental building complex in Aleppo.[5] The waqf’s revenues were intended to support the two holy cities Mecca and Medina on the Arab peninsula, with important payments for several religious services to a number of individuals especially in Medina. As inspector (nazir) of the endowment, the Shaykh al-Islam, the Ottoman Empire’s highest-ranking religious authority, also received an important share (50 gold pieces as stipulated in the original endowment document, the waqfiyya)[6]. As local administrator (mutawalli) was appointed the Naqib al-Ashraf of Aleppo (the head of the Prophet’s descendants), usually chosen from among the local nobility (ayan).[7] The waqf of Ibshir Mustafa Pasha thus linked imperial and local levels as well as the support of the Two Holy Cities (al-Haramayn al-Sharifayn), a very rewarding pious deed.

Ibshir Mustafa Pasha’s undertaking in Aleppo, a complex including a khan (commercial inner-town inn), khan-like structures with work spaces (here named qaysariyya), shops, etc., cemented the role of the northern suburb as Aleppo’s second economic centre and offered numerous opportunities for the textile industry, particularly the establishment of looms in the qaysariyyas.

Although comprising single components of a traditional Ottoman külliye (term for an architectural complex; cf. Khusrawiyya), the inner layout – here as a compact block integrating the mosque and also a coffeehouse – is fundamentally different. The location of the mosque is another difference: compared with the prominent and central position of the mosque in an Ottoman külliye, it occupies a side position, here at the southeastern corner of the complex, and is – without a tall minaret and central dome – barely visible (see picture 1).[8] The mosque covered only about 5 percent of the endowment’s overall surface and consumed only about 14 percent of the endowment’s revenues, as tells the waqf account from 1222 AH /1807–08 AD.[9] 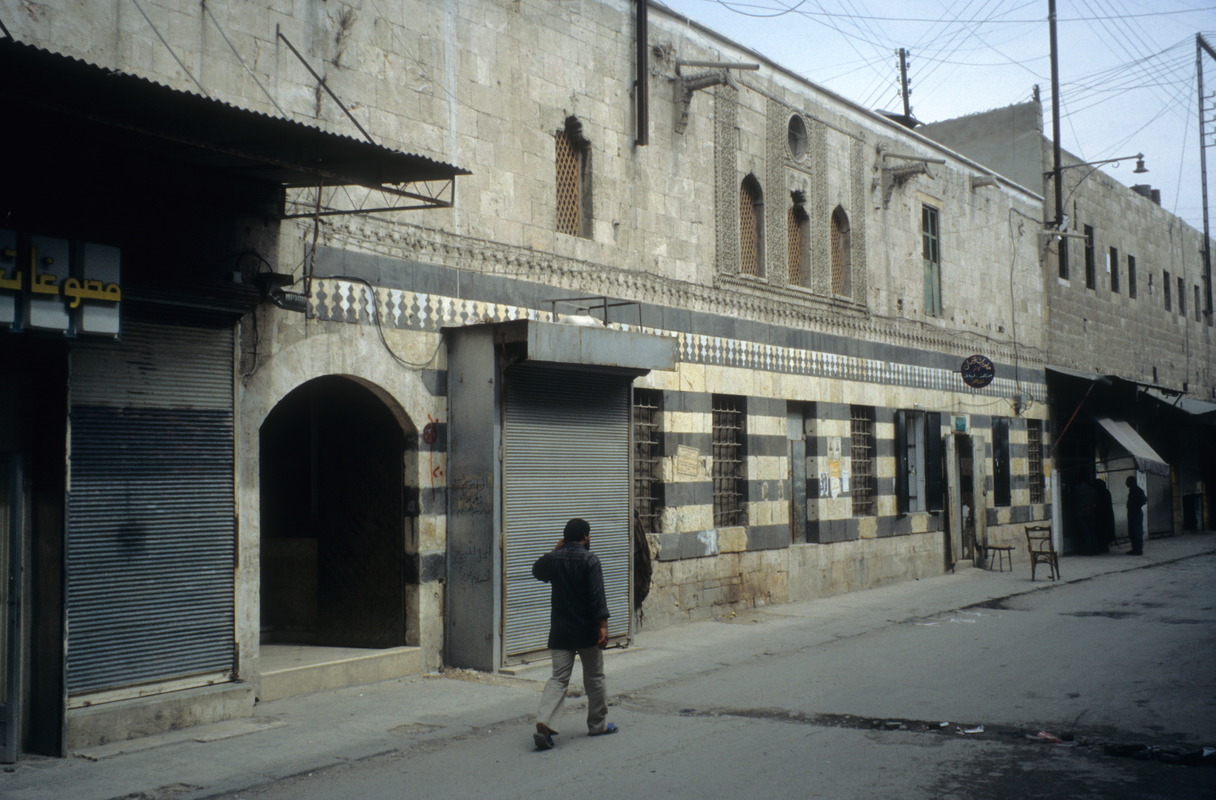 The monumental and sumptuous coffeehouse (see picture 2) at the southwestern side of the Ibshir Mustafa Pasha waqf complex offered, together with the bathhouse (hammam) of Bahram Pasha’s waqf on the opposite side of the alley, an excellent ‘public’ space for this part of the town shared by Christian and Muslim inhabitants alike. The Scottish physician Russell tells us that in the middle of the 12th century AH / 18th century AD all groups within society frequented the coffeehouses, except the notables (who had coffee rooms in their spacious houses)[10]. Other than the waqf’s coffeehouse, whose clients were only men, the Bahram Pasha hammam was also a public space for women, although without confessional mixing – reserved some days of the week for Christian women, some days for Muslim ones.[11]

Several amusements were proposed to the coffeehouse customer. Music bands composed of the traditional ensemble (see picture 3), like ud (Arabian lute), rabab (spike fiddle), nay (Arabian flute) and riqq (tambourine), toured during evening hours from one café to the other and performed for the customers. Storytellers (sing. hakawati) entertained the crowd with the story of pre-Islamic warrior poet ʿAntara Ibn Shaddad and his love to his cousin ʿAbla, or the folkloric epos narrating the adventures and battles of the Mamluk sultan al-Zahir Baybars[12] (d. 676 AH / 1277 AD), and the like.

Finally, the figures of the shadow play, fixed characters like Karagöz and his counterpart Hacivat, amused the attendants of the coffeehouse. The scenarios being open to improvisation might contain critical allusions to local events and political conditions, as in the description of Alexander and Patrick Russell (both serving as doctor for the Aleppo factory of the – British – Levant Company):

“In the beginning of the Russian war in 1768, the Aleppo Janizaries, who had returned from the field rather in disgrace, were introduced on the stage giving a ludicrous account of their achievements; and Kara-guze could not well miss the opportunity of throwing some severe sarcasm on their prowess.”

Even governors of the city or its judges (sing. qadi) did not escape being ridiculed on stage.[13]

A 1795 inventory lists benches and about 120 stools, as well as a number of braziers, carpets, lanterns, and other equipment that was available for the numerous customers of the coffeehouse of Ibshir Mustafa Pasha’s waqf. The small number of coffee cups (only 30) indicates that cups were passed from one customer to the other.

Coffee as a beverage was probably introduced in Syria and the Levant (Bilad al-Sham) around 935 AH / 1530 AD; more than a century later, it was apparently widely consumed in Aleppo. Nevertheless, the consumption of coffee, as well as the pleasures proposed inside the coffeehouses, frequently aroused the suspicion of both the religious and civil authorities. Coffeehouses were identified as places of ‘bad behaviour’ and the mixing of different classes of people, so several attempts were made in the 10th and 11th centuries AH / 16th and 17th centuries AD to close coffeehouses and ban the consumption of coffee. Again, in the 13th century AH / 19th century AD, when the coffeehouses became places where newspapers circulated and public opinion was expressed, authorities kept them under strict control.[14] Notwithstanding all these measures, the consumption of coffee and the coffeehouse as a social place could not be suppressed.

Ibshir Mustafa Pasha’s waqf or endowment continued to play an important role for the economy of the northern suburb of Aleppo well into the 20th century, although structural change caused the textile industry being gradually replaced by other businesses. 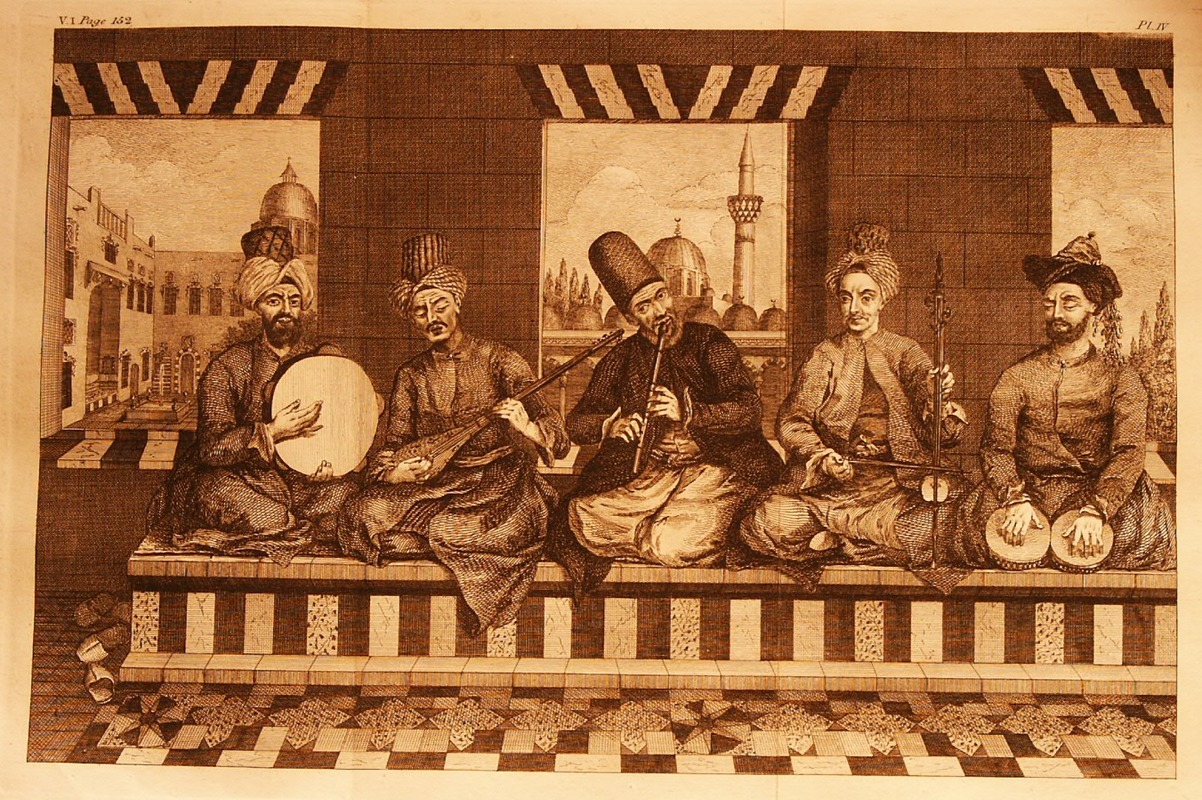 Russell, The Natural History of Aleppo, 1:93

Russell, Alexander. The Natural History of Aleppo: Containing a Description of the City, and the Principal Natural Productions in Its Neighbourhood. 2 vols. 2nd ed. Edited and revised by Patrick Russell. London: G. G. and J. Robinson, 1794.
https://archive.org/details/naturalhistoryof01russ.

Watenpaugh, Heghnar Zeitlian. The Image of an Ottoman City. Imperial Architecture and Urban Experience in Aleppo in the 16th and 17th Centuries. Leiden: Brill, 2004.
https://books.google.de/books?id=utQo4ek-7BIC&printsec=frontcover&dq=isbn:9789004124547&hl=de&sa=X&ved=0ahUKEwjribignsbYAhWQ-6QKHXSgCxQQ6AEIJzAA#v=onepage&q&f=false.