“There was no transatlantic alliance of critical historians”

During the Nazi years, a great number of academics emigrated to the United States for political reasons and above all because of their Jewish heritage, and these émigrés included many historians who were able to continue their careers across the Atlantic. It was in these particular circumstances that German and American historians were brought together anew after the war. Historian Dr Philipp Stelzel of Duquesne University in Pittsburgh has studied this emerging transatlantic scholarly community and the resulting mutual intellectual influence. In his book History after Hitler he not only analyzes the impact of American historians on their German colleagues and historiography in Germany after 1945, but also, conversely, how German historians influenced their colleagues in the USA. We spoke with him about his book. 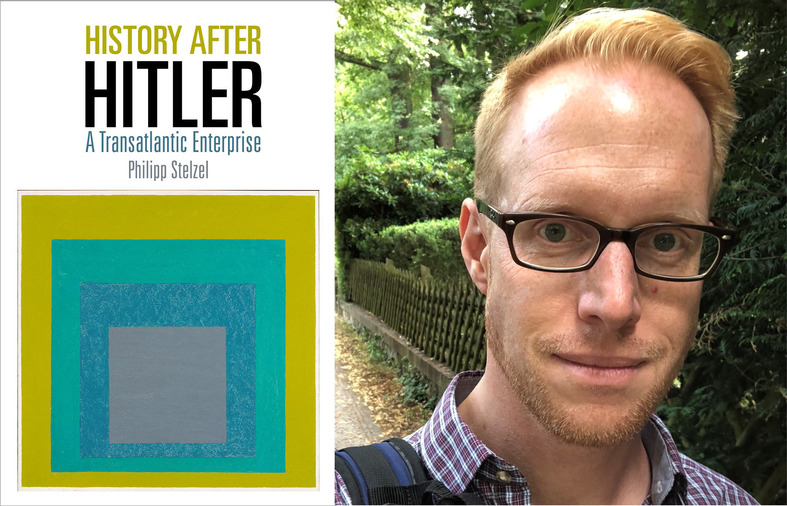 “German historiography in Germany and the USA”

L.I.S.A.: Dr Stelzel, you recently published a book with the intriguing title “History after Hitler: A Transatlantic Enterprise”. In this book, you outline the transformation process that took place in the post-1945 West German historical profession and analyze the specific exchange between German and American historians. Your study is not the first to examine the course of German historiography since 1945, though. The books by Winfried Schulze, Georg G. Iggers and Ernst Schulin immediately come to mind, so what prompted you to tackle this topic? What are you doing differently than your illustrious predecessors?

Dr Stelzel: The titles you mentioned, particularly the studies by Winfried Schulze and Georg Iggers, are of course still relevant. Yet my book differs from them in two ways: While Iggers focused on the late 19th and the first half of the 20th century and Schulze examined the decade and a half after the end of the Second World War, History after Hitler analyzes developments in the Federal Republic from the late 1940s all the way to Reunification. I am particularly interested in the historical profession’s changes in the 1960s and 1970s. In addition, my book discusses German history in the Federal Republic and the United States, while Schulze and Iggers concentrated on the German side.

Whereas Ernst Schulin emphasized the help American historians provided in “modernizing” the discipline in West Germany, my book makes a different argument. American colleagues were undoubtedly attentive observers of historiography in Germany, but seeing them as providing some kind of intellectual foreign aid rather misses the point. In terms of methodology, there is no doubt that American historians and social scientists provided stimuli for their West German colleagues. Nevertheless, it is also striking that many American historians studying Germany looked with skepticism at the Bielefeld project of historical social science, even though they had great respect for Hans-Ulrich Wehler and Jürgen Kocka professionally as well as personally.

“The Sonderweg thesis was initially popular on the American side”

L.I.S.A.: The title of your work might mislead us into seeing Hitler and the Third Reich as a key vanishing point for the historical profession in West Germany after the end of the Second World War. Was dissociation from Hitler the central guiding principle for German historical writing after 1945? Should we see history as a discipline with democratic intent? In political science this was the core intention – nurturing West German citizens to become democrats. And another issue: If Hitler was the vanishing point of postwar German historiography, what was the case for German history before Hitler? The Sonderweg thesis? Is it all heading towards Hitler and then subsequently away from him?

Dr Stelzel: In a very general sense, German historians dissociated themselves from Nazism, but there was a good deal of argument over new directions in the field, as Winfried Schulze, Sebastian Conrad, Christoph Cornelissen, Thomas Etzemüller, Nicolas Berg, and others have shown. Overall, the study of history in West Germany was certainly different from political science in that regard – take, for example, Gerhard Ritter’s vehement rejection of calls from both Social Democratic and Christian Democratic politicians that the future Institut für Zeitgeschichte be oriented toward democratic education. Ritter had no problem of course with an explicitly political study of history – he just didn’t like the particular direction these politicians were calling for.

In the decades after the Second World War, historians on both sides of the Atlantic occupied themselves with the question of how to explain Hitler and Nazism. What’s particularly interesting, though, is that the Sonderweg thesis, either implicitly or explicitly, was initially popular on the American side. Gordon Craig’s The Politics of the Prussian Army (published in 1955), for example, emphasized the negative influence of the military on Prussian and then German history––a phenomenon unique to Germany. Leonard Krieger’s The German Idea of Freedom (1957), Fritz Stern’s The Politics of Cultural Despair (1961), and George Mosse’s The Crisis of German Ideology (1964) also described a German “special path” but in the history of culture and ideas. Yet after the 1960s, the Sonderweg thesis lost considerable popularity in the USA, and its social history variant articulated by the Bielefeld School, influential in Germany, found few advocates among American historians.

L.I.S.A.: It is well known that the German historians who moved to the USA during the Nazi years and returned after the War brought with them new impulses from the Anglo-American academic tradition, which only took effect in the Federal Republic some time later. It wasn’t until the 1970s that so-called “social history” became the dominant historical paradigm, particularly thanks to Hans-Ulrich Wehler and others. Less well known is your argument that German historians also influenced their American colleagues, but which ones? Which elements of historical scholarship in Germany appealed to them? And exactly what form did this exchange take – was it institutional or rather individual?

Dr Stelzel: I take a different view of the role of the (very few) historians who returned from the United States. There was really only one in the field of modern German History––Hans Rothfels (Hans-Joachim Schoeps returned from Sweden, not the United States). Although Rothfels gave up his völkisch nationalism of the 1920s and 1930s, I don’t really see him as having imported any of the new Anglo-American approaches to the study of history in Germany. Dietrich Gerhard, who taught alternate semesters in St. Louis and Cologne, was actually an Americanist when he worked in Germany. More influential in this regard, even if he did not resettle in Germany until after his retirement, was Hans Rosenberg. Rosenberg taught at Brooklyn College and then Berkeley, but spent several semesters as a guest professor in Berlin and Marburg. At the Freie Universität, he influenced young historians such as Gerhard A. Ritter, Gerhard Schulz, Karl Dietrich Bracher, and Gilbert Ziebura.

The historians who stayed in the United States did, however, influence transatlantic academic relations and the development of the field in West Germany more generally. Hajo Holborn and Klaus Epstein were transatlantic mediators, as was Fritz Stern, although apart from his intervention in the Fischer controversy, Stern exerted more of an influence on the broader German public’s views than on those of his colleagues on the other side of the Atlantic.

Similarly, the social history of the 1970s was not merely an American import. When working on his book Bismarck und der Imperialismus, Hans-Ulrich Wehler undoubtedly benefitted from his intimate knowledge of the literature on American imperialism (after all, he wrote his first habilitation application on the subject) and from personal contacts with William A. Williams and the Wisconsin School. As a post-doc, Jürgen Kocka spent a year at Harvard, where he worked on a comparative study of German and American white-collar workers, keeping close contact with Oscar Handlin and Alfred D. Chandler.

Nevertheless, when one reads Wehler’s and Kocka’s texts on the methodological reorientation of historiography in Germany, one finds very little that can be attributed to direct American influences. Rather, the texts suggest that Historische Sozialwissenschaft developed primarily in a German context.

German influences on American historians came initially by way of the scholars who had emigrated to the United States. Again, Hans Rosenberg at Brooklyn College taught a sizeable cadre of future historians––and by no means only scholars of Germany. There was, for example, Eugene Genovese, who went on to become an important historian of slavery in the United States. At Yale University, Hajo Holborn supervised more than 50 dissertations by historians, many of whom subsequently taught at prominent universities themselves. Later, it was the historians of the Bielefeld School in particular who influenced their American colleagues in various ways.

Contrary to the self-perception of the Bielefeld School, however, there was no transatlantic alliance of critical historians. Rather, many Americans in their own works came to reject the Sonderweg interpretation, even if they often used such works as Wehler’s book on imperialism as a starting or a reference point. What is more, Wehler’s main German rival Thomas Nipperdey also found his books well received on the other side of the Atlantic.

“Essential for my book were historians’ papers”

L.I.S.A.: What source material did you use in your analysis? Which elements of it are new?

Dr Stelzel: Essential for my book were historians’ professional and personal papers. Because of his central role in the development of the West German historical profession and his many years of editing Historische Zeitschrift, Theodor Schieder’s papers were particularly revealing.

In addition, the papers of Hans Rosenberg contained many detailed letters from Hans-Ulrich Wehler in which he spoke very openly about his plans for the reorientation of historical science in Germany. Rosenberg served as a kind of father figure to Wehler, as the younger historian himself put it.

L.I.S.A.: In your book you connect the examination of, as you yourself write, intellectual and cultural transatlantic exchange in historiography to the level of society as a whole. You claim that this argument of the “Westernization” or “Americanization” of West German society is too simple and is ultimately false. Yet don’t the major lines in politics, business, culture and academia tend to back this up – starting with the political and military integration with the West, the spread of pop culture in films, music and lifestyle, and indeed the academic influences on a positivism rooted primarily in empiricism?

Dr Stelzel: I don’t dispute the fact that West German society and the West German study of history became more Western in the decades after the Second World War. And with an understanding of Americanization as the selective appropriation of American influences, I also attempt to relate the development of the discipline to the political and cultural history of the Federal Republic. After all, studies on Americanization published in the last few years have also argued for seeing this process as one of selective appropriation.

There were and still are differences, of course, between German and American historiography, but I see the development of the transatlantic community of historians after the Second World War as a success story. Even if European and German history programs have lost ground at American universities in recent years, the exchange between German and American historians has not suffered as a result.

Dr Philipp Stelzel answered the questions of L.I.S.A.’s editorial team in writing. The English version here has been translated from the original German.