The situation escalated after 4 April 2017, when the Hungarian Parliament reduced the parliamentary debate to a three-hour plenary discussion and passed an amendment to the higher education act that undermines the continuing operation of CEU in the country—all without any previous consultation otherwise required by the law, not even with the Hungarian Academy of Sciences. The amended law requires CEU, among other items, to build a campus in the United States and conditions its further operation on an agreement between the US Federal Government and the Government of Hungary, disregarding the fact that accreditation issues are the competence of the individual states, in this case the state of New York, whose educational authorities had accredited CEU’s degree programs.

The passing of the law took place amidst an extensive defamatory campaign against CEU, and specifically its founder, George Soros, by the government, unfoundedly charging it with fraud, illegitimate privileges earned via corruption and pressure, violations of the law, and so on. CEU forcefully rejected these charges and seeks legal remedies, including the amendment’s annulment through the review of the Constitutional Court—a procedure whose outcome, despite sound legal arguments, is unpredictable. The situation is aggravated by further specifications in the law that leave practically no time for negotiation and stipulate that unless each requirement is fulfilled, the university will not be able to admit new students into its programs after 1 January 2018.

The government’s thinly veiled motivation is CEU’s firm adherence to the values of critical thinking and the indispensability of sound reflexive knowledge in society, which the government perceives as threatening its determination to transform Hungary into an ‘illiberal democracy’.[1] The fierceness of the attack on CEU, and the intensity of a concomitant anti-EU and xenophobic ideological campaign that seeks to turn Hungary into the pioneer of a break with the liberal-democratic political consensus that has characterized the post-1945 dynamic of Western European politics, came as a surprise to many observers who perceived Viktor Orbán as a pragmatic and cynical power-maximizer devoid of strong ideological commitments. However, taken from a more longitudinal perspective, it is interesting to note that the idea of the break with the liberal-democratic consensus had been first launched by Orbán as an ideological weapon of self-defense back in 2011. In the context of the debates in the European Parliament following the controversial media law and the acceptance of a new ‘Basic Law’, Orbán was confronted with the vocal disapproval of socialist, liberal, and green MEPs, with the most fiery criticism being formulated by Daniel Cohn-Bendit.[2] In response, Orbán started to talk about a fundamental cleavage between him and his critics and claimed to represent the ‘forgotten Europe’ of Christianity, family values, and national pride, which was undermined by the Western 68-ers as much as by East European communists. Supported by similar arguments formulated by the chief ideologist of the regime—the director of the House of Terror, Mária Schmidt—Orbán has stressed that the cultural hegemony the ‘new Left’ achieved in 1968 made the articulation of a truly rightist ideological position impossible in the West, while in Hungary (and Eastern Europe in general) the communist ‘old Left’ had no legitimacy whatsoever and thus the Right could be more ideologically self-confident. While this argument is rather inaccurate historically, it somewhat unexpectedly struck a soft chord with some of the Western European conservatives, who would have hardly subscribed to an open attack on their own domestic left-wing and liberal political competitors in these terms but projected some of their existing frustrations on Orbán’s ideological struggle, turning him into a champion of unconventional right-wing solutions—perhaps somewhat too crude, but doubtlessly efficient, corresponding to the ‘lower’ level of political culture in the East.

This aura became all the more powerful in 2015, when the escalation of the refugee crisis, to which the Orbán government contributed substantially by first blocking the borders of the country, nearly causing a humanitarian catastrophe, and then overnight forcing all the refugees out of the country, effectively placed all of the burden on Austria and Germany. The heavy-handed measures of purging the country of asylum seekers divided the Western European public as well, and turned the Hungarian leader into the hero of those political forces that saw the solution of the refugee crisis in building symbolic and actual walls. This was the moment when the Bavarian prime minister, Horst Seehofer, demonstratively invited Orbán to Munich in order to signal his profound disagreement with Angela Merkel’s policies. Concomitantly, the crisis and the xenophobic campaign orchestrated by Hungarian state media restored the popularity of Orbán and his party among the Hungarian voters. Especially after the 2014 elections, where, due to the redesigned electoral system allowing gerrymandering and making the system even more disproportionally majoritarian, FIDESZ won 66% of the seats with a mere 44% of the votes, Hungarians had become increasingly disaffected by the endemic corruption, especially visible in the use of European structural funds, captured by a handful of oligarchs personally related to the leader.

With the successful demolition of domestic checks and balances tolerated and sometimes tacitly assisted by European institutions, as well as by Western European governments, Orbán became increasingly convinced of his own pioneering role in establishing a ‘new world order’ of self-enclosed and ethnically pure nation-states (a modernized version of Johann Gottlieb Fichte’s Geschlossener Handelsstaat), eliminating the universalist references to human rights and democratic representation, and allowing instead for the proliferation of oligarchic and hybrid authoritarian regimes, allegedly fitting the ‘national character’ of the respective country. Orbán was rather vocal about his aspirations already in the famous Tusványos speech of summer 2014, where he described his policies with the concept of ‘illiberal democracy’ and sketched out his program of building a ‘state based not on welfare, but on work’. But all of this had a completely new twist in autumn 2016, when a series of global developments seemed to signal a global turn towards ethnopopulism and anti-liberalism, especially Brexit and the election of Donald J. Trump, but also the rise of several right-wing populist parties in Europe such as the Alternative for Germany (Alternative für Deutschland, AfD), the Freedom Party of Austria (Freiheitliche Partei Österreichs, FPÖ), and Marine Le Pen’s National Front (Front national, FN) in France.

It is not by chance that Orbán was among the first political leaders to enthusiastically greet Donald Trump’s election in the United States, after he had already expressed his support for him during the electoral campaign. He stated, rather paradoxically, to have received the ‘gift’ from a higher instance to finally act as a sovereign country, which obviously implied that from now on the US authorities would not monitor the state of human rights and press freedom in Hungary, thus allowing Orbán’s government to proceed with shaping the country to his own liking. From then on, the developments escalated, and the propaganda campaign sustained by the ever-expanding state-owned and state-supported media positioned Orbán as the third key figure of the global transformation, alongside Vladimir Putin and Donald Trump. The flagship of the campaign is the popular news website, Origo, which the Hungarian branch of Deutsche Telekom recently sold to a company close to the government circles; the deal was facilitated by the promise of an exclusive contract of every Hungarian state servant with this mobile network operator.[3]  While the details of the discussion remain uncertain, and perhaps will never see the light of day, the attack on CEU came less than two months after Putin’s visit to Hungary and also coincided with the intensification of the Russian government’s campaign against George Soros through the various domestic and international media outlets controlled by the Russian secret services. This Russian campaign included the emergence of a mysterious ‘STOP Soros’ movement in Macedonia, the country that, incidentally, hosted most of the anti-Clinton post-factual internet sites and servers seeking to influence the US elections. This movement supported the nationalist former prime minister Nikola Gruevski, a strategic ally of Putin.[4] Importantly, the campaign used the emails of the Brussels office of the Open Society Foundation that had been hacked in summer 2016 by the same hacker team that hacked the US Democrats’ internal correspondence. It is perhaps also not accidental that two weeks before the legislative attack against CEU, a Russian undercover TV crew sneaked into CEU and prepared a widely transmitted reportage with the assistance of Hungarian politicians, ‘unveiling’ a ‘conspiracy’ orchestrated by Soros that allegedly used NGOs to topple nationally oriented governments and impose his cosmopolitan values on the world.[5]

All of this international entanglement points to the need to place CEU’s case into a global context. The attack on CEU weaves together a complex web of antiliberal and neo-authoritarian political forces and ideological streams. This leads the authors of this thematic block to believe that, apart from the fate of one particular institution, the case is symptomatic for the general predicament of the academic sector at the beginning of the twenty-first century. Even more broadly conceived, it leads to questions of freedom of thinking and expression, as well as civil liberty and the rule of law. This is particularly the case because the attack against CEU coincided with a number of other highly alarming instances of an authoritarian crackdown on academics and universities, including the current campaign against academics in Turkey and the attack on the European University of St. Petersburg. CEU has become a symbol of academic freedom, and the politically motivated legislative attack on an independent institution of higher education—especially because it takes place in a member state of the European Union—has provoked unexpectedly wide support and solidarity: from the president of Germany, Frank-Walter Steinmeier; from the members of the European Commission and the European Parliament; from the president of Academia Europaea; from eighteen Nobel Prize winners, including Mario Vargas Llosa and Orhan Pamuk; from the Regius Professors of Oxford and Cambridge; from the president of the Hungarian Academy of Sciences; from the presidents of leading US universities such as Berkeley, Harvard, Duke, NYU, and Princeton; and from tens of thousands of other individuals and institutions.

In the articles following this introduction, however, rather than analyzing the developments in depth, which would require much more space, and also a thorough engagement with the burgeoning interpretative literature on the authoritarian turn in Hungary after 2010,[6] we provide an overview of some features of the specific research and educational milieu of CEU and its contribution to a new vision of the history of Central and Southeast Europe. While it would be an exaggeration to claim that the attack came exactly because of the emphatically transnational perspective of history developed by CEU, it is nevertheless true that the campaign orchestrated by the government targeted the very essence of the educational process at CEU, namely its transnational embeddedness conducive to a rational and scholarly approach to historical, social, economic, and philosophical problems devoid of any national bias. 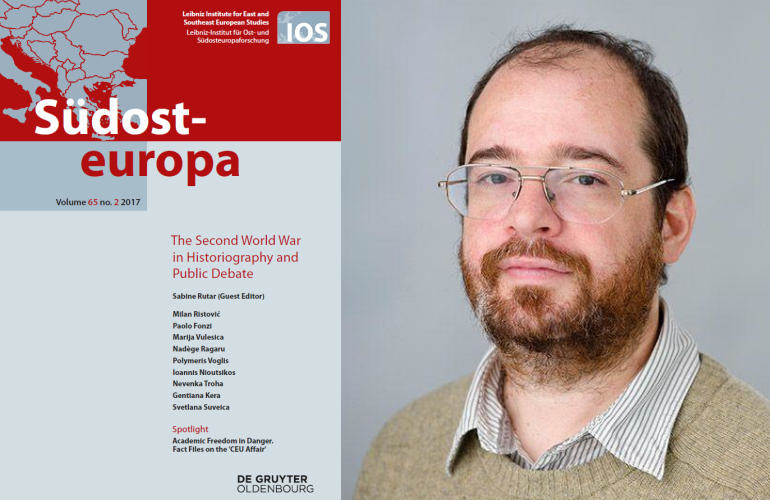