The Long End of the First World War: Ruptures, Continuities and Memories

While the armistice of November 11, 1918 marked the end of fighting on the Western Front, the case was different in other parts of the world, particularly in the former Russian and Ottoman Empires as well as in East Africa, where armed conflicts related to the destruction and re-formation of political orders persisted, in some parts even for several years. These struggles affected daily life and biographical trajectories as well as local perceptions, representations and interpretations of the War. Which events or developments marked the "end" of the war? How did the processes which marked the end of the War differ regionally, and how did prisoners of war, demobilized soldiers, women, or children from and in Asia, Africa, and the Middle East perceive and experience the "end"? How did this "end" influence new networks, social movements, society, economic processes, or ecological developments? And how were these questions discussed by contemporary intellectuals in Asia, Africa or the Middle East?

With the centennial of the outbreak of the War in 1914 and the increasing temporal distance it conveys, the nature of remembrance, too, is changing. The centennial in 2014 was marked by extensive commemoration activities in many parts of the world, not only on various political levels but also in the media, in the fields of literature and in the arts. The symposium asks whether and how they shaped contemporary dialogues on commemoration, not only in Asia, Africa, or Latin America but also in Europe. Can the loss of "Zeitzeugen" be compensated by the use of electronic and other media? And: does this make transnational commemoration easier (or more difficult)? We are particularly interested in issues and questions of what could be called "non-memory", forgotten or submerged memories. What is written out of historical narratives and what is being rediscovered? In this respect, the symposium will also discuss questions of changing memories and contested commemorations.

Registration
If you would like to attend the conference, please register by clicking on registration. There are no fees for attendance but registration is essential.

Language
The conference language is English.

Exhibition on display: Lives from a Global Conflict. Cultural Entanglements during the First World War
This exhibition showcases the life trajectories of 16 individuals - some famous, some not - who lived through these extraordinary times, and whose experiences illustrate the global and varied nature of the Great War. The exhibition is an outcome of a three-year collaborative research project entitled "Cultural Exchange in a Time of Global Conflict: Colonials, Neutrals, and Belligerents during the First World War", funded by HERA (Humanities in the European Research Area). It was created by four project teams: King's College London (Santanu Das, Daniel Steinbach, Anna Maguire), Utrecht University (Geert Buelens, Tessa Lobbes, Tom Gerritsen), Adam Mickiewicz University in Poznan (Hubert van den Berg, Natalia Stachura, Martyna Pedzisz), and ZMO in Berlin (Heike Liebau, Larissa Schmid, Jan Brauburger). For more information and the complete program, please see https://www.volkswagenstiftung.de/nc/veranstaltungen/veranstaltungskalender/veranstdet/news/detail/artikel/the-long-end-of-the-first-world-war-ruptures-continuities-and-memories/marginal/5006.html. 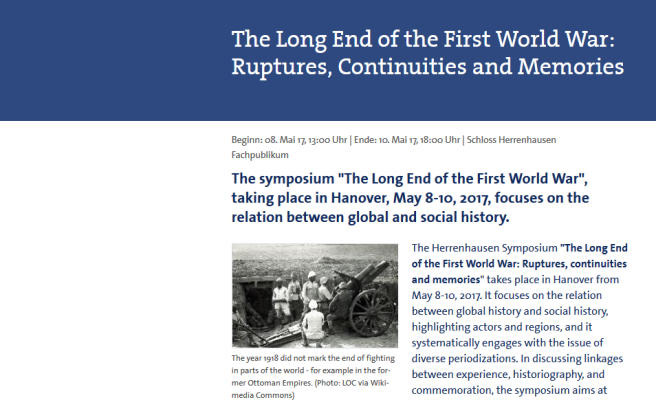 The year 1918 did not mark the end of fighting in parts of the world - for example in the former Ottoman Empires.