At the end of the 5th century AH / 11th century AD, Aleppo was part of the Seljuk Empire with its centre in Baghdad. In 479 AH / 1086 AD, the city was formally ruled by Amir Aqsunqur al-Hajib, progenitor of the Zangid dynasty, on behalf of the Seljuk Sultan Malikshah I. However, the Seljuk amirs had to share the city government with local notable families, primarily the Banu l-Khashshab, who also served as the city’s judges (qadis) and who exercised control over the population.

Abu l-Hasan Muhammad ibn al-Khashshab took the initiative to construct a new minaret for Aleppo’s most important mosque, the Great Mosque or Umayyad Mosque; an inscription records his and the amir’s name. This minaret, which collapsed in 2013, was an integral part of the Umayyad Mosque and upgraded the central sacred space of Aleppo, where there had once been temples, churches, and finally a mosque, at least since the 2nd millennium BC.

The mosque’s endowment (waqf) was by far the largest in Aleppo and comprised a number of covered bazaar streets (suqs) in the central market district, land to the west of the old city, and objects all over the city, as well as outside of it. Over the centuries, benefactors continued to enlarge the mosque’s endowment. Arguably the most important of these was Nur al-Din Zangi (d. 569 AH / 1174 AD), who launched a huge reconstruction program for Syrian cities after centuries of decline.

The 6th century AH / 12th century AD saw the reconstruction and expansion of the Umayyad Mosque and its surroundings, specifically the adjacent site of today’s Madrasa al-Halawiyya. This Islamic college was formed on the site of the Byzantine cathedral, which the same Abu l-Hasan Muhammad ibn al-Khashshab had seized from the Christian community during the crusaders’ siege of Aleppo (winter 1124–25 AD) and transformed into a mosque. Remains of a church can still be seen there. Later on, Nur al-Din Zangi established the madrasa that attracted a number of important Hanafite scholars.

Throughout the centuries, the Umayyad Mosque remained the most important mosque of Aleppo and – together with the Madrasa al-Halawiyya as one of its oldest and most prestigious schools – its indisputable religious centre. The minaret set the rhythm for ritual prayers throughout the city. 18th century waqf documents inform us that the muezzins of Aleppo’s mosques had to wait for the muezzin of the Umayyad Mosque before they were allowed to call for prayer.

The late 19th century saw profound restorations of the Umayyad Mosque and the Madrasa al-Halawiyya. Modern urban developments – the neighbourhoods of al-Tilal, Bustan Kullab, and parts of al-ʿAziziyya were constructed on waqf land belonging to those two institutions – proved very profitable. The Aleppine historian and jurist Kamil al-Ghazzi (1853–1933) claims that in the case of the Madrasa al-Halawiyya, this additional income increased the waqf’s revenues substantially. 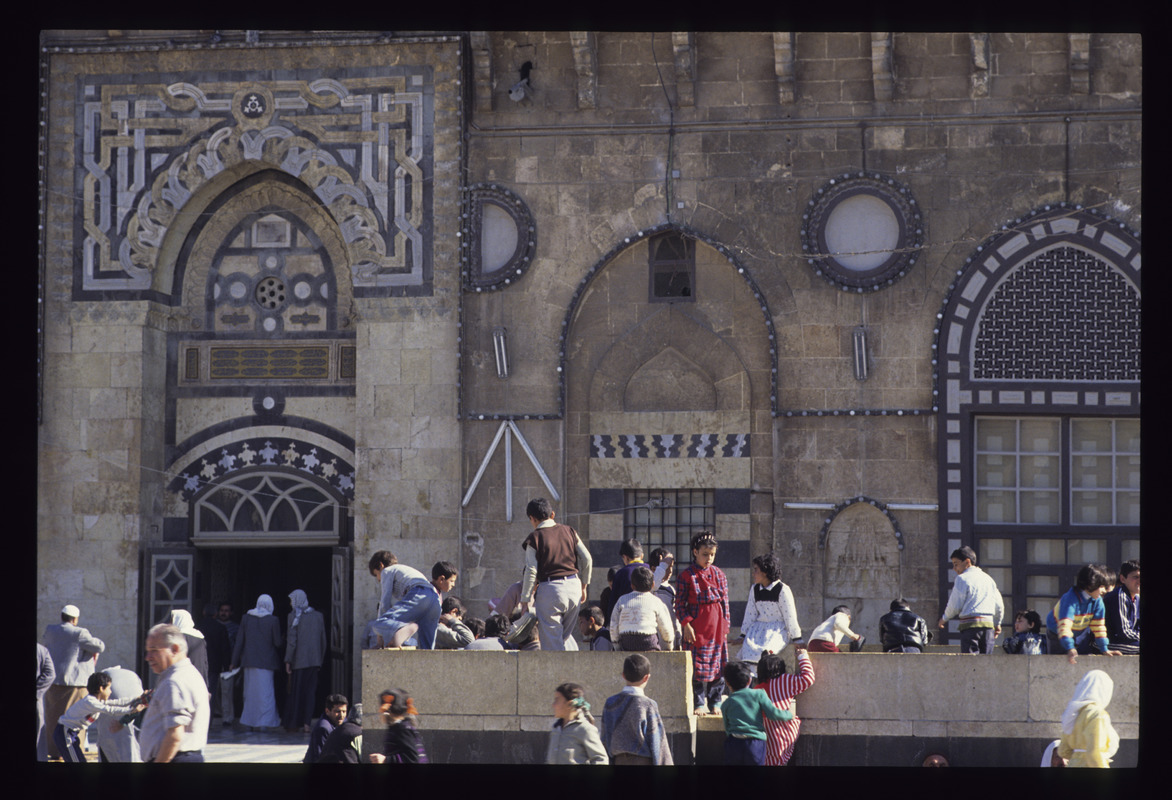 The Great Mosque or Umayyad Mosque (al-Jamiʿ al-Umawi al-Kabir) is located in the heart of the Ancient City of Aleppo to the north of the main street of the covered historic market (suq). This remarkably vast site has always been important. The area originally seems to have been the location of the agora in Hellenistic times, then of the forum in Roman times. Later, it was supposedly used in part as garden of the Byzantine Cathedral of Saint Helena, fragments of which are nowadays preserved inside the Madrasa al-Halawiyya.

The Great Mosque is the largest and one of the oldest mosques in ancient Aleppo. Over the centuries, it was destroyed several times but was rebuilt and refurbished time and again. The mosque’s first version was built by Umayyad caliphs, likely both al-Walid ibn ʿAbd al-Malik and Sulayman around the year 96 AH / 715 AD, in order to make their mark in Aleppo. The 7th century AH / 13th century AD Aleppine chronicler Ibn al-ʿAdim noted that the Umayyad Mosque of Aleppo was originally opulently decorated in similar a fashion to the one in Damascus.

The prayer hall’s ground plan is rectangular with four rows of pillars, each running parallel to its long side. The ceiling is made up of cross vaults. The main nave, perpendicular to the prayer niche (mihrab) at the rear wall and facing south towards Mecca (qibla), is slightly wider than the other naves and accentuated from the outside by the protruding main entrance in the courtyard facade and a dome in the middle of the flat roof. This may be reminiscent of the prominent transept nave of the Umayyad Mosque of Damascus.

Until recently, the prayer hall was furnished with a wooden pulpit (minbar) which was created in the 8th century AH / 14th century AD during Mamluk times and is considered the oldest and most valuable object of its kind from Aleppo. The shrine room in the prayer hall is devoted to Zakariya, father of John the Baptist; both are prophets in the Islamic traditions.

The structure of the mosque is completed by a rectangular courtyard surrounded by three open arcade halls and a square minaret at the north-western corner. This tall minaret is divided into five zones of varying height and topped by a gallery. It is decorated with blind arches formed by profiled bands which are lined by calligraphic inscription bands indicating the construction date, which spanned from 483 AH / 1090 AD to 489 AH / 1096 AD, and mention the names of the then-ruling Seljuk sultans, the judge of Aleppo, and the architect.

The people of Aleppo feel connected to the Great Mosque both emotionally and through faith, and it is recognized as one of the city’s most important symbols. 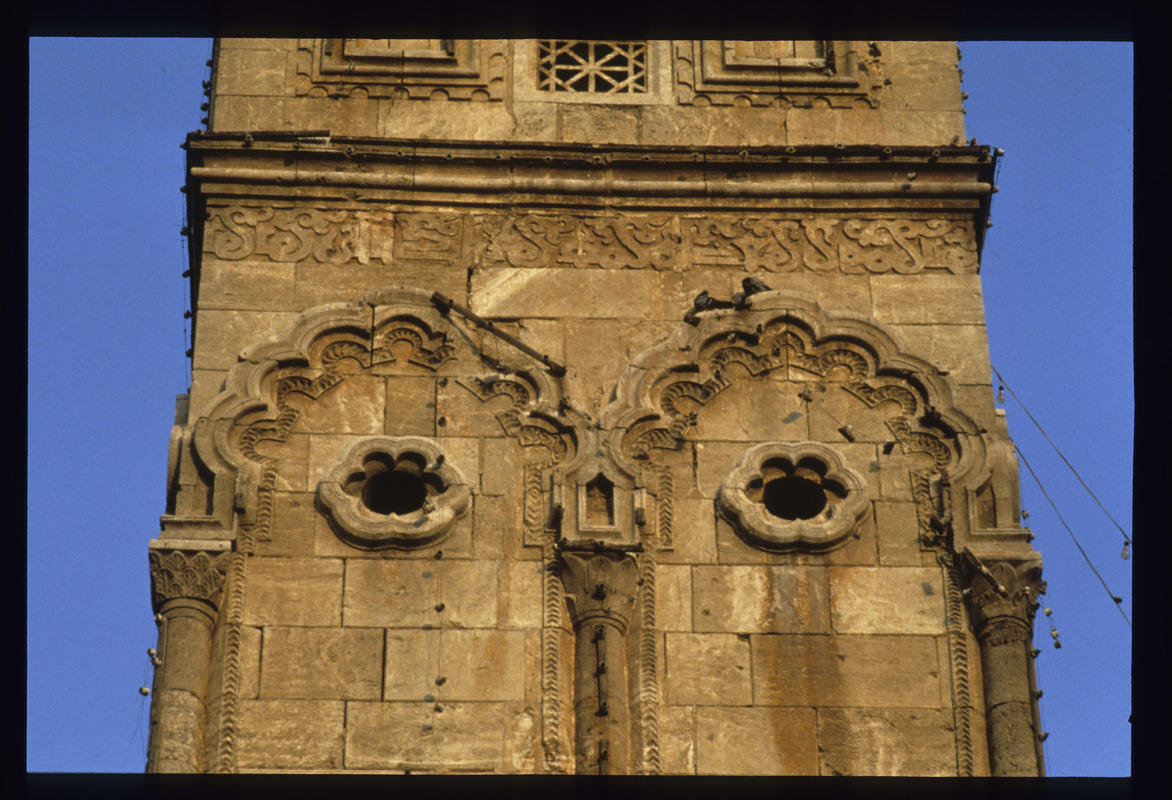