"Our vision is to re-tell history"

From Sharhabeel Ahmed to Kamal Kela, Sudan's creatives have always inspired revolutions. As a driving force of change, the diverse and vivid art scene of the country persisted throughout the centuries and survived despite colonialism, military regimes and dictatorships, and the split into two countries. The latest overthrow of Omar Albashir in April 2019, is no exception.

Cartoonist Khalid Albaih, born in Romania, raised in Qatar and based in Denmark, and curator Larissa-Diana Fuhrmann, who studied in Sudan and lives in Germany now, compiled an extraordinary art book, presenting thirty young Sudanese creatives from different fields. They gave them a platform to express their perspectives on Sudan. Those artists write and rewrite the history of their own country while envisioning a creative future. We asked the editors and design team Locale about their work, their motivation, and their vision. 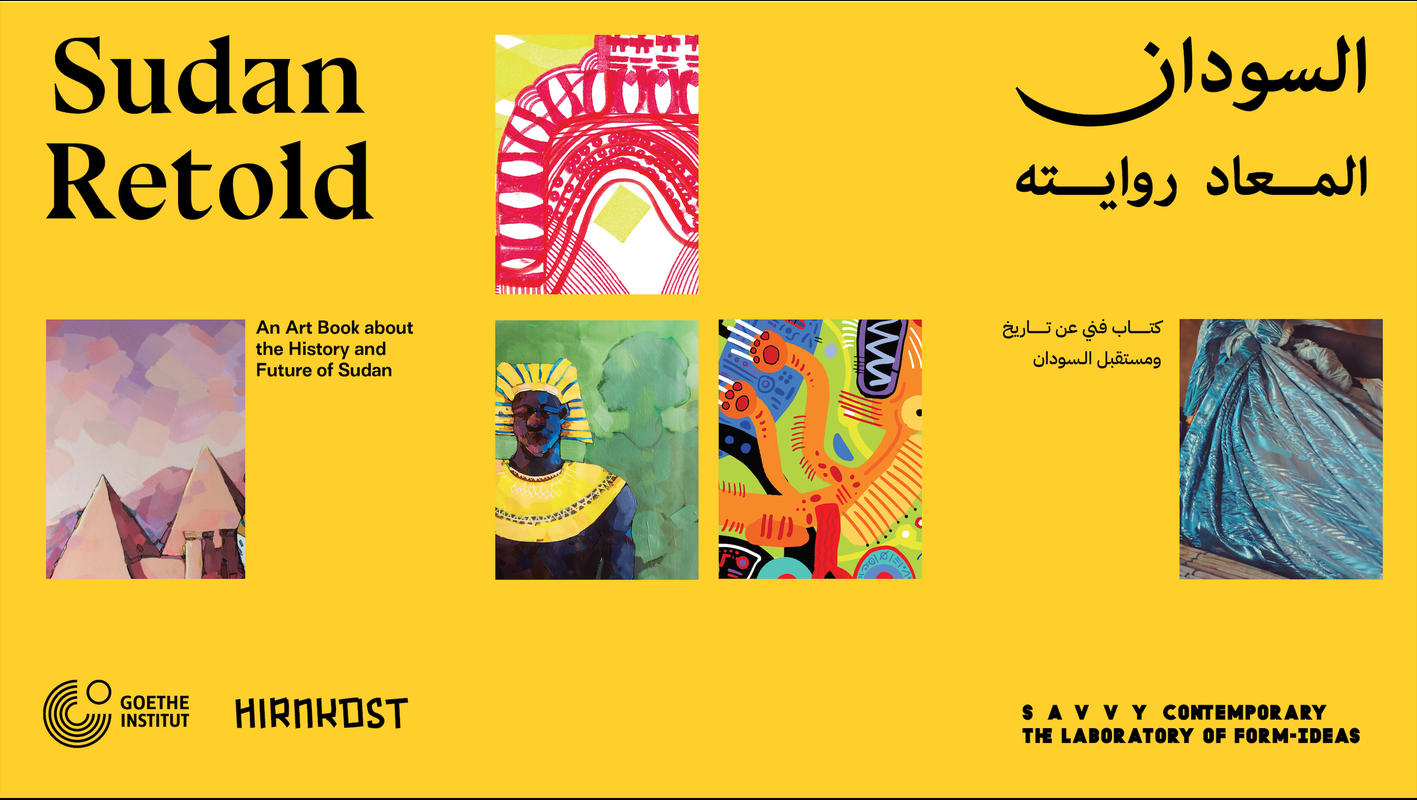 "Putting the book together was an incredible collaborative effort" 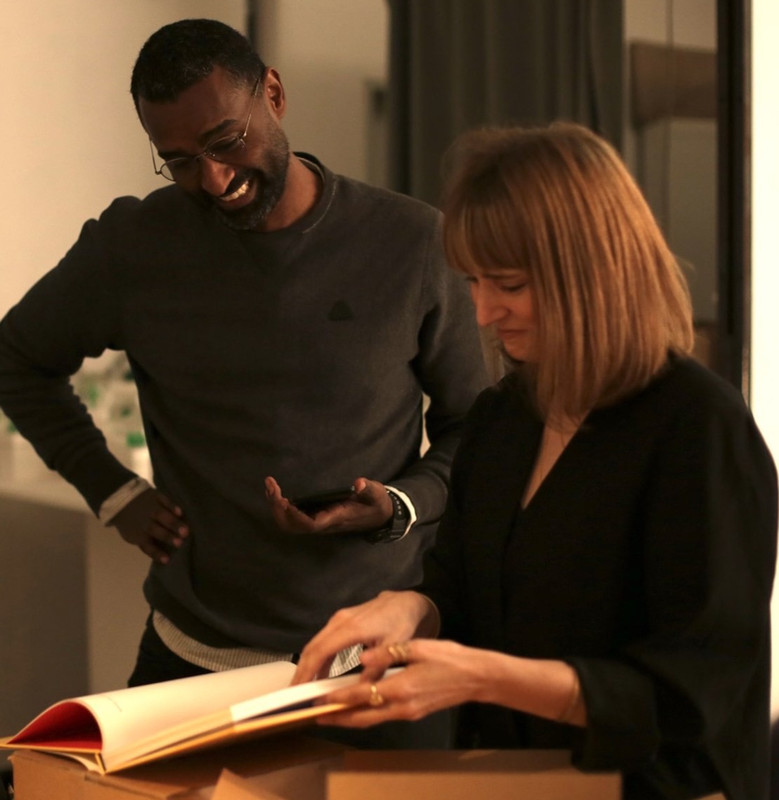 Khalid Albaih and Larissa-Diana Fuhrmann at the book launch in Berlin, November 2019 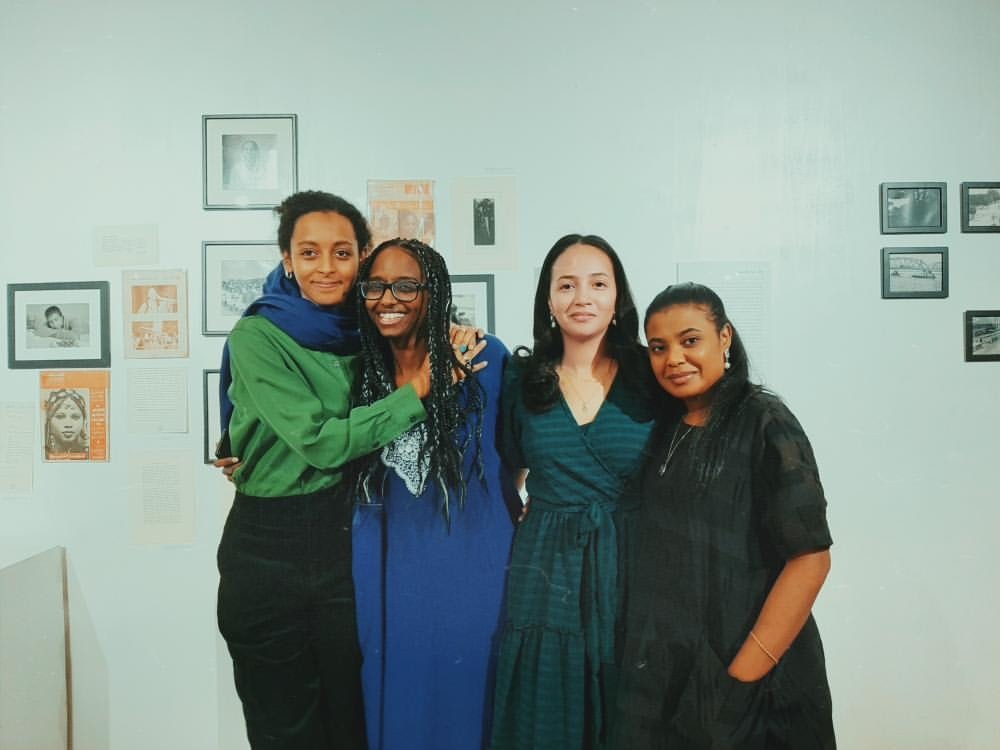 L.I.S.A.: Dear Mr Albaih, dear Ms Fuhrmann, you recently published an art book containing more than 30 Sudanese artists presenting, as you put it “the history and future of Sudan”. Please tell us about how the two of you met and how you came up with the idea for this project. Locale, how did you join the team and what was your role in the process?

Fuhrmann: I was following Khalid's work since I was a visiting student at Khartoum University in 2009 and got engaged in the Sudanese arts scene in the following years. He was drawing one cartoon a day under the name of Khartoon! for a while and not just the quantity but also the quality was impressive for me. I enjoyed his artistic transformation of world news and his simple aesthetics.
In 2015, our mutual friend Mayada Adil, a Sudanese fashion designer based in Paris, introduced us via email while I was living in Khartoum, Sudan, and he was working in Doha, Qatar. Khalid had told her about his idea for the book and she thought I could be the right person to approach since I was working at the program department of the Goethe-Institut Sudan at the time being engaged in the artivistic scene in Sudan. When he shared the concept with me, I was excited and started making plans for a kick-off workshop and tried to find out more about publishers to approach. This is how the three-year journey of Sudan Retold started.

Locale: We met Khalid Albaih in Khartoum in late 2017 with some of the contributing artists to Sudan Retold. Khalid had been an avid supporter of Locale and we were huge fans in return, so we were excited to sit with him and hear about the plans he and Larissa had for the book. We talked about history and art and where the two merged. First, we were asked to contribute a chapter, and we were thrilled to join the team. Then, during the process, our role grew into designing and helping to put the book together. It was challenging due to the distance. Not only because were we far away from the editors Khalid and Larissa, but our team members were also in different countries working in different timezones. Putting the book together was an incredible collaborative effort. Then, the revolution in Sudan began, and while we were producing something about our history, we were simultaneously watching history unfold before our eyes. 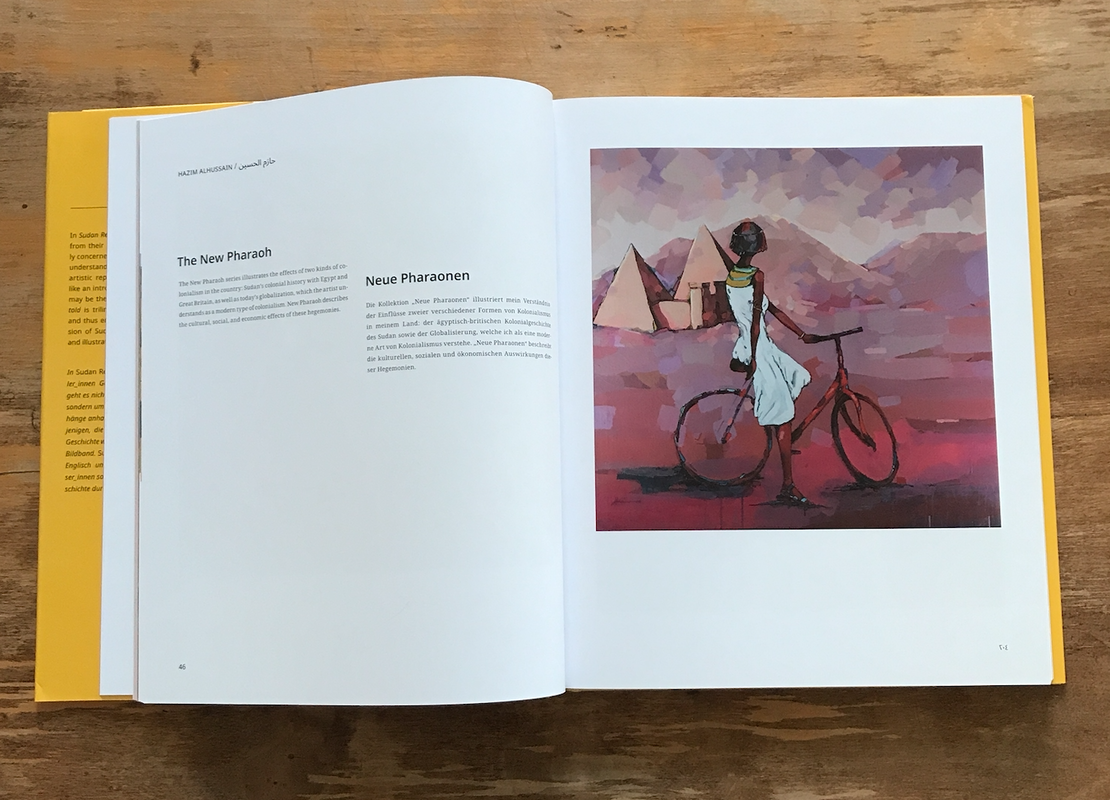 "We received more than 100 applications"

L.I.S.A.: Among the creatives presented in your book are graphic designers, film producers, illustrators, even cooks. That is a broad range. Why did you choose this approach? Why did you feel it was important to create such a platform?

Fuhrmann: Our vision from the beginning was to find a broad range of Sudanese artists and creatives in Sudan as well as the diaspora to retell history from their perspectives. Hence, we didn't narrow it down to a specific group or genre, and through a call for applications for the first workshop in January 2016, we received more than 100 applications from all around the country. It was interesting to see how people interpreted the concept and we narrowed it down to around 30 people who attended the three-day workshop at the Goethe-Institut Sudan. Khalid presented his vision and additionally to the artists and creatives we were joined by two historians who gave additional input and answered questions. The conversations and collaborations that emerged were intense and often personal. The diversity of attendees brought a great variety of topics to light. While some decided to talk about a certain historic event like the attempted revolution in 1924 or a public figure like John Garang, others decided to take a more personal approach and talk to their parents and grandparents. We brought together like-minded artists who wanted to understand our concept and take part in this unique endeavour. Many of them ended up collaborating beyond the project, as for example during the revolution. This showed us the importance of the network we created. 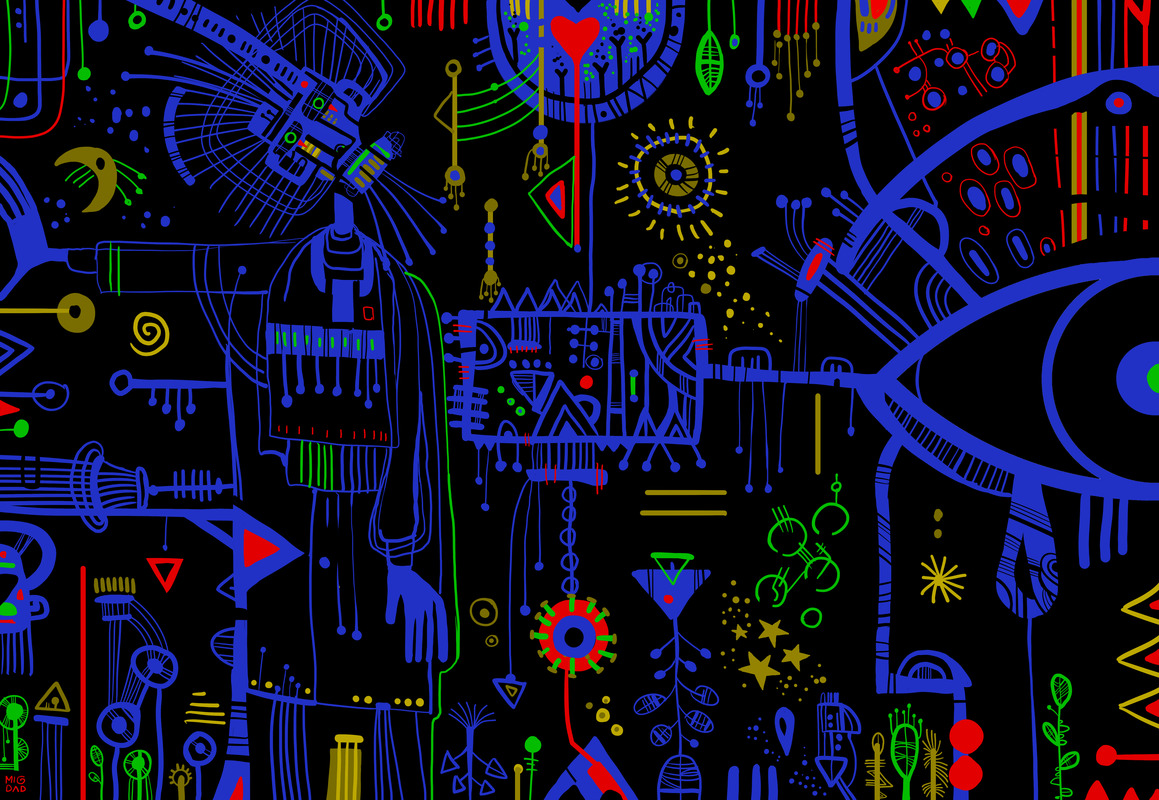 Painting by AlMigdad Aldikhaiiry, part of the chapter on the Stone Age

"The revolution changed the limits for freedom of expression" 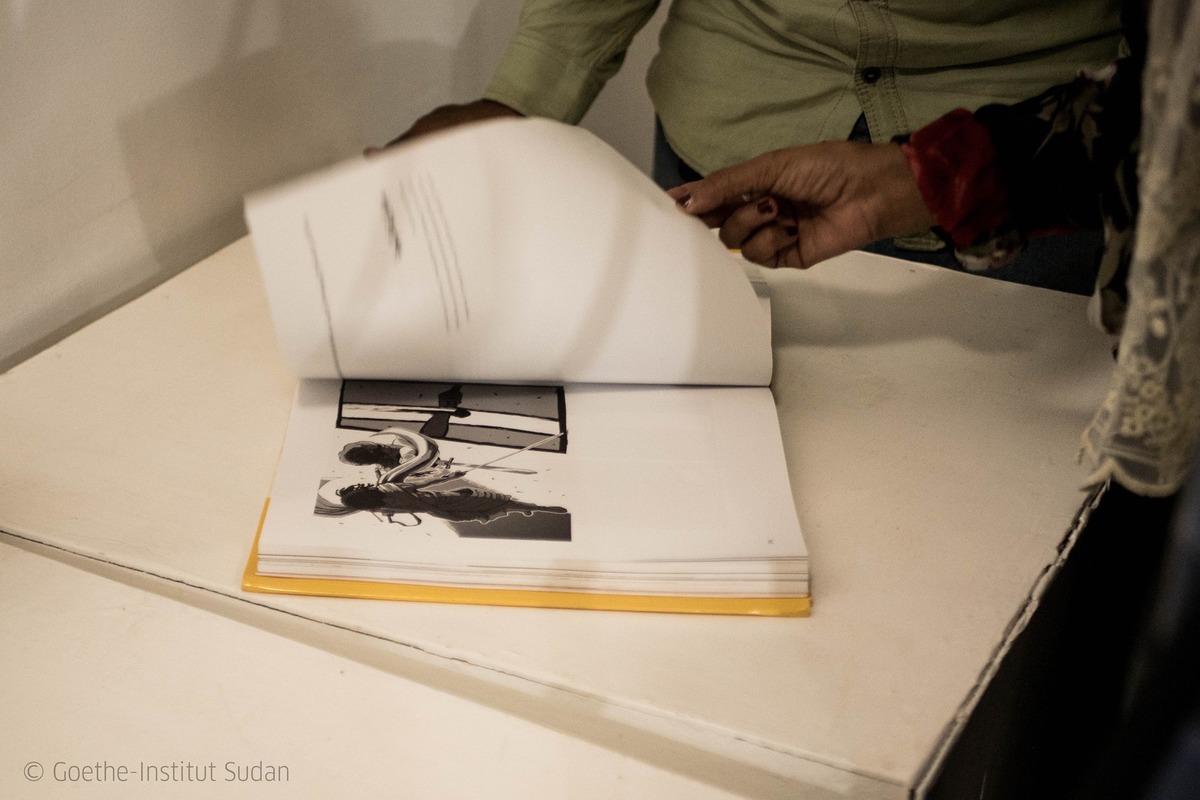 L.I.S.A.: As you mention in the foreword, the book was created before the revolution that started in December 2018 and led to the fall of Al-Bashir one year ago, in April 2019. Would you have done something differently if you would have known all that? Would the book look different?

Albaih: Of course, the freedom we have now that we didn't have then would have opened doors to us in terms of telling more stories about Sudan's history, especially the past three decades. Back then, we had to think very carefully about which stories could be in the book since it was important to us that the book can be distributed in Sudan - and we didn't want the participants based in Sudan to get into trouble with the government. The revolution changed the limits for freedom of expression that existed before.

L.I.S.A.: On broader terms, which correlation or interrelationship do you notice between the fine arts and history?

Fuhrmann: We as editors were not primarily interested in historical details, but rather in an understanding of historical contexts through artistic representation. I remember Khalid's first questions to the attendees of the workshop when they hesitated to choose a topic: ‘Where is your family from?’ ‘What is special about the state, city, village, neighbourhood, house you come from?’. This made the concept of Sudan Retold tangible and they saw their personal family history as part of a bigger picture. After they made their choice for the topic the question on how to translate the narratives into artistic expressions came up. For those who were cartoonists, painters, musicians or graphic designers the choice of medium came naturally, for others who didn't follow an artistic profession often chose a collaboration partner.

"The personal history as part of a bigger picture" 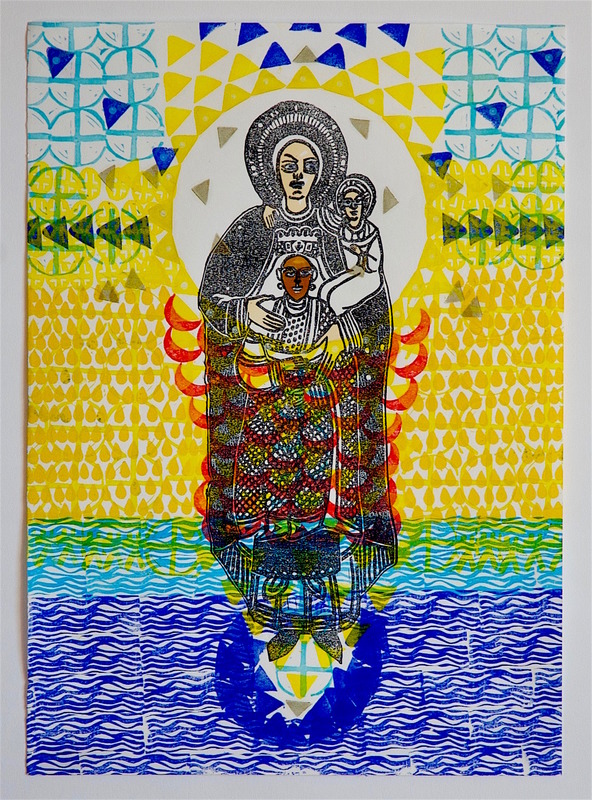 Painting by Dar Al Naim Mubarak. She took over the chapter about the city of Faras in the Christian Era.

L.I.S.A.: Locale, you have worked on different projects now connecting history and the arts. Can you tell us a bit about your inspiration and recent work?

Locale: While we don't necessarily focus on a singular theme or topic, we do consistently try to create briefs that bring artists together. We love to collaborate with other creatives, to birth something that goes beyond individual effort. This helps us to achieve a stronger, more tangible cultural substance.
We want our work to be accessible, historically correct and culturally meaningful. In order to do that, we rely heavily on research. One thing that we have noticed is that it is an ongoing challenge - that many like ourselves are having to overcome - when it comes to engaging with the historical and archival research that is necessary to create work that revolves around political, cultural, and social themes in Sudan. This challenge was the driving force behind our latest project, 'This Will Have Been'; Archives of the Past, Present, and Future. We curated an exhibition about the Sudanese archive in Khartoum last December. We approached the archive as a site of action, running through 3 timelines: the past in searching, the present in reclaiming, and the future in activating. We raised questions on where we look for the archive via film screenings, panel talks, and the exhibition. Why is reclaiming our visual culture important, and what is our role now, as a generation, to act as archivists. Reflecting on the difficulties that we face when producing work, and how we always attempt to be future-facing, we engaged with the community to start a conversation on how the archive is a way to access the past but also as a lens through which we view the present and the future.

"Art and activism can accelerate a revolution" 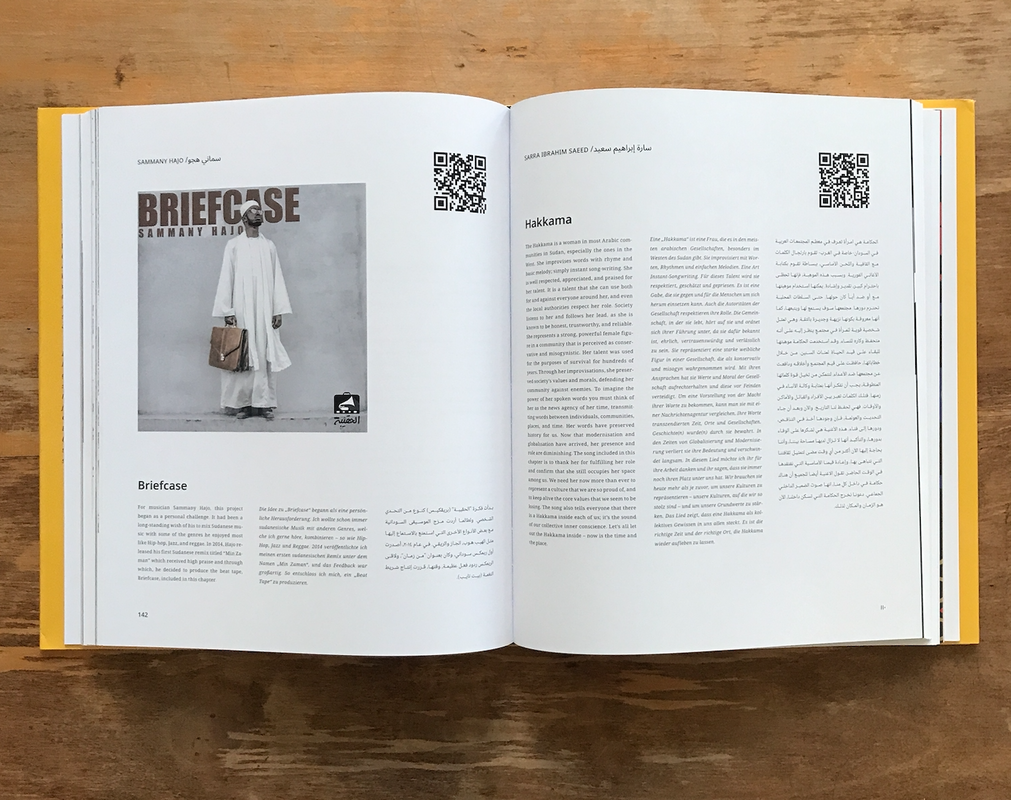 Musician Sammany Hajo is featured in "Sudan Retold". The album "Briefcase" can be accessed via qr-code.

L.I.S.A.: With the current government, everything is in the making in Sudan, the future uncertain. People celebrate the anniversary of the revolution while combating the Coronavirus besides all other challenges that come with a system change in a country. What do you personally wish for Sudan's future regarding the arts scene?

Albaih: I wish for everyone to stay safe. I can't help but think about the billions of dollars that were wasted on wars instead of healthcare as well as the brain drain that left Sudan without its brightest minds. Hopefully this revolution helped to bring a lot of them back. However, we did lose all those billions for good and it will be hard to rebuild the country without these resources.

Fuhrmann: I hope that the networks that were built during the revolution between artists and creatives will expand and that the support they received from the people will continue to grow. It is an important moment in time for artists in Sudan. After 30 years of oppression they got out of their seclusion, reclaimed spaces and showed a national and global audience how art and activism can go hand in hand and to not just document but also accelerate historic moments like a revolution. I wish that the energy and confidence of the artists will prevail despite the difficult circumstances and that more opportunities in the international arts scene will await them once this is over.

"A country telling its own history contesting colonial and eurocentric views"

Albaih: We have plans for a Sudan Retold Masters' edition in which we want to approach all the Sudanese masters in different art practices to retell the history and future of Sudan.

Fuhrmann: This will add to people's mental image inside and outside Sudan. A country telling its own history contesting colonial and eurocentric views. 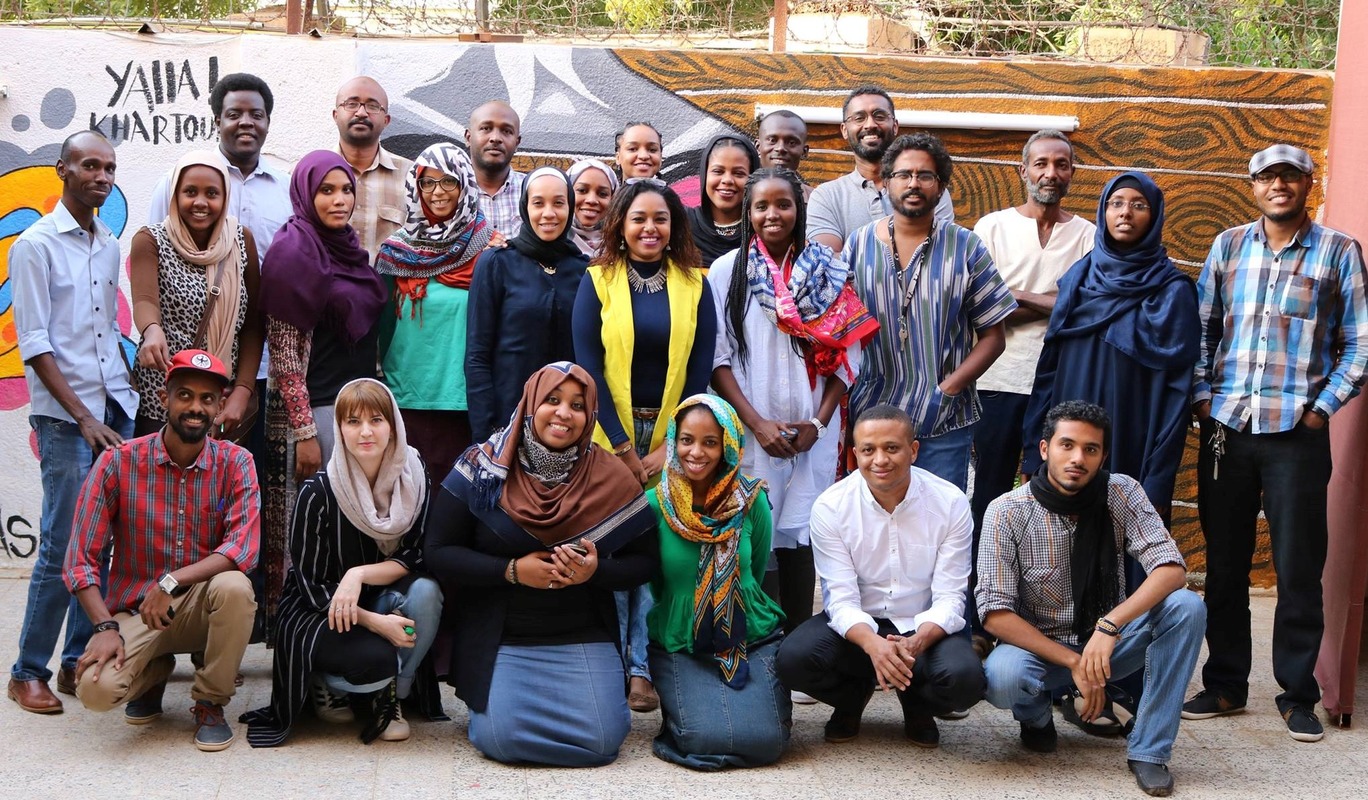 Authors, creatives, and editors at the Goethe-Institut in Khartoum, January 2017

Khalid Albaih, Larissa-Diana Fuhrmann, and the Locale team have answered the questions in written form.