The title "Jüdischer Islam" (engl. Jewish Islam) seems to be contradictory at first. However, it puts the study of Susannah Heschel in a nutshell, as the Judaist analysed how the Islam influenced Jewism and German-Jewish scholars in the 19th and early 20th century: Which parallels between the Qur'an and rabbinic literature did occur? In how far did a Jewish Orientalism exist? In an interview we asked Dr. Susannah Heschel about her study and the field of Jewish Islamic studies. 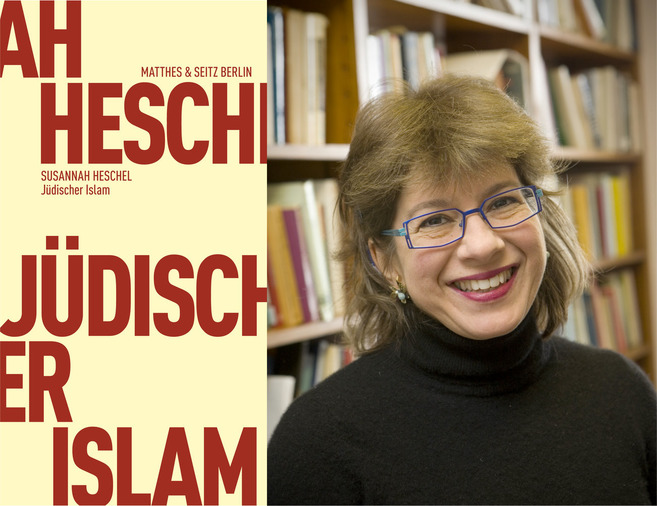 "The scholarship is by now nearly 200 years old"

L.I.S.A.: Dr. Heschel, you recently published the essay: “Jüdischer Islam” – translated to English as “Jewish Islam”. First, the title seems to be misleading as you deal with the history of Jewish Islamic scholars in Germany. Why the title?

Dr. Heschel: The title is meant to be slightly provocative and slightly ironic. The scholarship I am presenting in the book is by now nearly 200 years old. What interests me is not to judge its accuracy, but to try to understand why the study of Islam was of such great interest to German Jewish scholars. Why were they so fascinated by the parallels between Islam and Judaism? What did that fascination contribute to their identity as German Jews and to their understanding of Judaism? The sympathy they showed for Islam is what intrigues me.

"Parallels between the Qur’an and rabbinic literature"

L.I.S.A.: In your essay you show that with the publication of Abraham Geigers book “Was hat Mohammed aus dem Judenthume aufgenommen?” (1833) a new field of research was opened, which discusses Islam as a “daughter religion” of Judaism. What is this thesis based on?

Dr. Heschel: Abraham Geiger (1810-1874) was among the first young Jewish men admitted to German universities; women were not admitted until the late nineteenth century. Geiger studied at the University of Bonn from 1830 to 1833 and was part of a small group of male Jewish students who took courses in Arabic from Professor Georg Freytag, who welcomed them warmly. They began reading the Qur’an in Arabic and were amazed – as Geiger writes in his diary – by the parallels with Jewish texts. Geiger’s study of those parallels between the Qur’an and rabbinic literature was hailed all over Europe as a breakthrough and is to this day credited with inaugurating the modern scholarly study of Islam. Ultimately, it became quite common for Jewish theologians, aware of the remarkable parallels, to speak of Islam and Christianity as “daughter religions” of Judaism – that is, religious movements that carried Jewish monotheism to the pagan world. Interestingly, they credited Islam with preserving Jewish monotheism more carefully than did Christianity, which they described as having integrated pagan notions into their doctrinal claims regarding Trinity, Christology, Incarnation, and other ideas that they believed had no place in Judaism.

"A well-known Jewish teaching in the heart of Islam"

L.I.S.A.: A recurring term in your essay is the concept of the “Unheimliche”, with which many Jewish Islamic scholars described their study of Islam. According to Freud, the “Unheimliche” (engl.: the uncanny) is not only the unknown but also the suppressed well-known. If you follow that argumentation, doesn’t the concept say more about the longing of the scholars for ascertainment of their own identity, than about their studies?

Dr. Heschel: Scholarship is always both an insight into the object of study and an expression of the scholar’s subjectivity as well as cultural and political location. For Jewish scholars of the nineteenth century, who had very strong backgrounds in Hebrew religious texts (rabbinic literature), reading Suras in the Qur’an that are Arabic translations of Talmudic statements was an incredible surprise. I have described this as an experience of the uncanny – that a passage from the Mishnah or Midrash suddenly appears in the Qur’an: a well-known Jewish teaching in the heart of Islam. And yes, the uncanny feeling they experienced was also a thrill because they felt it demonstrated Judaism’s widespread influence on the monotheistic religion of Islam, thus affirming their own Jewish identity.

"The development of that idea by German Jews"

L.I.S.A.: Talking of longing or desire: An important destination for Jewish Islamic scholars was Andalusia – before the Reconquista and before the forced migration of Sephardic Jews. It is said that in Andalusia a symbiotic relationship between Islam and Judaism existed. For many Jewish Islamic scholars this concept is ideal. But is it true – for how long was the concept considered to be true?

Dr. Heschel: Much debate exists to this day about Andalusia and the relations that existed between Jews and Muslims. Whether or not it was a ‘Golden Age’ is not for me to determine; what interests me is the development of that idea by German Jews and what it mean to them, living in Germany and seeking equality within German society. Why would German Jews signify Judaism by building synagogues in Moorish architecture, for instance, if they were seeking to assimilate into a German society that was Christian and Orientalist? John Efron has written a wonderful book about the many dimensions of German Jews and the Sephardi mystique they fostered, and my own work on the imperialist dimensions of modern Jewish thought has now generated numerous new studies by younger scholars, such as Yaniv Feller’s forthcoming book on Leo Baeck and the Jewish Fantasy of Empire, and the recent co-edited volume, Colonialism and the Jews.

L.I.S.A.: Another concept you are referring to in your essay is the one of orientalism by Edward Said. How do the Jewish Islamic studies and the western orientalism differ? Was that even possible, as Jewish scholars were often part of western civilizations?

Dr. Heschel: Suzanne Marchand’s landmark book on German Orientalism in an Age of Empire argues that German scholars entered the field of Oriental Studies out of a desire to better understand the nature of religion, especially their own (Protestant Christianity), and not as part of an effort to serve the imperial interests of the state, as Edward Said argued in his book – though Said focused primarily on Britain and France. Jewish Orientalism was far more complex: Jews were identified in Germany as ‘Orientals,’ in both positive and negative ways. Jewish women were sometimes described in literary fiction as Oriental and therefore beautiful objects of Christian desire, but more often antisemitic rhetoric described Jews as Oriental and therefore foreign and repugnant. This put Jews in the complex position of both identifying as Oriental and having to redefine the nature of ‘Oriental’ as positive. Thus, the identification of Judaism with Islam was a way of placing Islam on the map of the West, with Judaism, and at the same time suggesting that the Orient offered a purity of religion that had been lost in Christian Europe. To that end, Jewish thinkers spoke of Islam as a religion of strict monotheism, ethical religious law, rejection of anthropomorphism, acceptance of science, and embrace of religious tolerance – and contrasted those values with Christianity.

"Scholarship in the State of Israel has continued to flourish"

L.I.S.A.: Which significance does Zionism and the Israeli-Palestinian conflict have for the Jewish Islamic studies?

Dr. Heschel: The study of Islam was brought to Palestine in the 1920s by German Jews, and it flourished with a remarkable generation versed in European philological methods. One of my students, Mostafa Hussein, who is originally from Egypt, has just completed a doctoral dissertation on the Hebrew-language scholarship on Islam during the era of the Yishuv. Some of that scholarship was not well-received by Arabs in Palestine, as the Israeli scholar Yuval Evri has demonstrated; Arabs resented, for example, in the invocation of al-Andalus in a lecture by A.S. Yahuda, delivered in Arabic, because of the political goals of Zionists, as I described in my book. Scholarship in the State of Israel has continued to flourish, reaching a peak, I believe, in the extraordinary work of Gideon Libson, of Hebrew University, who demonstrated the influence of Islamic law on the formation of Jewish law during the Gaonic period. Libson showed that because Islamic law was more liberal, the rabbis, living in Muslim regions, liberalized Jewish law. While the classical philological approaches of nineteenth-century European Jewish scholars continue, the most important and innovative scholarship on the Qur’an is taking place under the direction of Angelika Neuwirth, of the Free University of Berlin, to whom I have dedicated this book.

Dr. Susannah Heschel has answered the questions in written form.