Museum Storage and Meaning: Tales from the Crypt

In recent years, the field of Museum Studies has grown exponentially, establishing itself as a major area that lies at the intersection of a variety of disciplines. The majority of studies in the field, however, has been centred around issues of museum display. This kind of discourse tends to ‘read’ the museum as a text, examining the objects it exhibits and the manner in which it does so and analyses the way audiences receive or reject the intended messages of the museum.

But museums put only a fraction of their collections – sometimes as little as 2% – on display. Although the popular press sometimes discusses this as a ‘waste’ of resources, many objects in reserve are not displayable, and were acquired with no intention of being shown to the public. A focus on ‘display’ thus distorts the museum in many ways: It ignores the fact that museums do not just consist of exhibition halls but of vast hidden spaces in which objects are stored, conserved or processed; it  literally omits millions of objects from our museum histories that have been gathered but seldom or perhaps never been shown; and lastly, it presents the museum as an organized and stable space, in which only museological ‘results’ are visible, not the intermediate stage of their coming into being, and certainly not any traces of ‘wrong turns’ of the past when museums may have made acquisitions that for reasons of ethics or taste, it would now rather disavow. As a result, not only a vast physical but also important historical, epistemological and semantic aspect of museums and their collections are eliminated from our discussions.

The edited volume Museum Storage and Meaning: Tales from the Crypt is a strong intervention in this discourse. Turning attention to the vast reserve collections of museums can cause a shift in our understanding of the process, scope and meaning of museum collections and how we will understand and study them in the future. Historically, the ‘backstages’ of museums have been areas that performed important functions and fulfilled intentions that reveal deep purposes of the museum that go well beyond a mere history of display. Backrooms, for example, often included archives, study rooms and libraries not open to the public, which have been and still are centres of scholarly pursuit. In recent years there has been growing interest in the ‘unseen’ aspects of the history of museums both within and outside traditional scholarly circles. Many museums have opened ‘Visible Storage’ areas, in a gesture of allowing publics to get a glimpse of the ‘backstage’ of the museum.

Yet in the expanding literature on museum studies, there is as yet no volume that examines museum storage through a theoretical, analytical lens and a transcultural lens. This volume is the first such book and will physically expand the terrain of museum studies by bringing the museum’s ‘dark side of the moon’ into sharp focus. The book’s historical, theoretical and philosophical intervention as well as reflections on practical issues by scholars and museum practitioners, concern the architectural character of storage spaces; the relationship between storage and canonization; the politics of collecting; the use of museum storage as a form of censorship; and the economic and epistemic value of museum objects. Its essays discuss a range of museums, including grand Universal museums and small local ones; museums of art and archaeology, as well as of medicine or science. The volume reminds us how museums of distinct disciplines once had interlinked origins.

Thinking about the threshold between storage and display provokes not only questions about the mysterious ‘backstage’ of museums, but entirely new questions about canonization, the politics of collecting, the ethics of preservation, and economies of storage and display; categories that may and will be discussed very differently in Asia, Europe or Africa. Due to its geographical range and the variety of settings, the book is also relevant to broader concerns in imperial history with intercultural contact. Inspired by a workshop held under the aegis of the India-Europe Advanced Research Network in 2014 at the V&A in London, it contains case studies from Britain, Cameroon, Germany, Greece, India, Nigeria or Turkey. This cross-cultural approach sheds light on shared museum protocols as well as intensely localized practices and priorities. Museums are under increasing pressure to encounter their own past as issues such as repatriation are constantly discussed in public. Within these campaigns, more nuanced and less Eurocentric histories of museums have gained particular currency in attempts to demonstrate the lasting destructiveness of imperialism, colonial collecting and ownership. Storage matters in these discussions since it questions the purposes of Western values towards preservation per se. Currently, ongoing conflicts, threats and destructions of objects and heritage, for example, have triggered growing scholarly interest in the ethics and the history of collecting and museums, in particular the preservation of heritage. While some consider it as a duty for Western museums to preserve objects in the longue durée, many objects in these museums are in fact out of view or inaccessible. This volume also brings attention to other means of storage and preservation, e.g. through recycling, re-contextualization or reburial. Further, it brings up sharp questions about the present-day functions, practices and meanings of museums, many of which are the residue of colonialism.

The duty of preservation is juxtaposed with ‘undisplayable’ and uncomfortable objects: ‘sacred’ nature objects, objects unsuitable due to political censorship, and ethical and practical questions surrounding the provenance and acquisition of many specimens and objects. Over time, artifacts are subject to changing priorities: through historical circumstances, changing tastes, economic constraints, demands upon space, or the calls for repatriation, an object might fit the aims and needs of a museum during one time, but not during another. Some essays will explore the awkwardness and anxiety some objects cause, which threat established canonical traditions. Other contributions discuss the ethics of collecting and the dilemmas raised by objects that were once keenly collected but have now fallen out of fashion or have become too ethically troubling to display.

There are many reasons why certain kinds of museum objects are destined from the beginning to be ‘storage objects’, rather than ‘display objects’. Some things are too large or too small to display. Some are aesthetically unremarkable, incomprehensible or simply too boring. Others are too fragmentary. Some were judged to be morally or religiously sensitive, pornographic or too politically charged to be made public. What is it that informs the decisions to show certain things, and to keep others off display? And what changes in history, taste or knowledge caused objects to fall out of display-worthiness and be consigned to the store? What are the consequences for an object that loses its displayability? Does it lose value, both economic and epistemic? Could it be sold, in order to purchase objects of greater value?

Several essays also deal with the ‘spaces of storage’ and current trends in museums of making storage ‘visible’ – either through the production of visitable storage spaces, or through the aegis of the digital. Although museum storage areas are seldom built with any of the flourish seen in the public areas of museums, the museum store is also a space, and it has its own architectural history. The vast chambers and passages of museum stores are the ‘dark twin’ of the gallery – stacking large numbers of objects but restricting visibility. But storage is also variegated. In recent years, museum keepers have begun to differentiate between ‘storage’ and ‘deep storage.’ With the pressures of real-estate values, objects that are not likely to be seen in the near future are moved off-site, sometimes to suburban, and then to rural and increasingly remote locations. There the museum may use subterranean facilities – disused nuclear bunkers and abandoned mines – to store objects. They are kept safe, but the difficulty of retrieving the objects from these locations makes it unlikely they will ever be removed from the store. Is this so different from storage practices in Asia, such as a ‘burial’ in the ground? The arrival of digital media has had a paradoxical effect on museum storage. On the one hand, the digital databases that are increasingly made available by museums make reserve collections visible; on the other hand, the availability of digital images makes the actual objects more inaccessible. The virtual image becomes the easier, cheaper and safer alternative to handling the original object, and the virtual then circulates while the original object remains in the vault.

A history of storage is a history of things that are not shown, but also not written about. Our understanding of museums and the intellectual histories they encode undergoes a radical shift when we consider what a museum shows alongside the (usually much larger) range of things it stores. 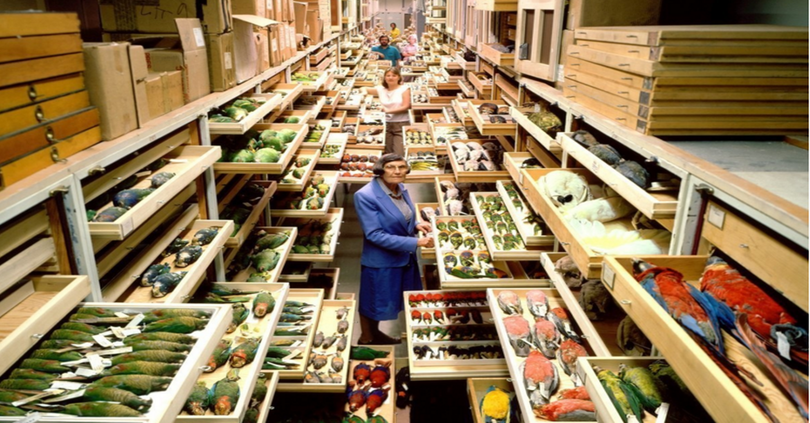