Mobilizing Ethnicity - Competing Identity Politics in the Americas: Past and Present

Within the context of the Quincentenary of the European expansion to the Americas in 1492, numerous indigenous groups throughout the continent mobilized to denounce the (post-) colonial legacy of present societies and to express their political, economic and cultural needs. The year 1992 can thus be related to the paradigmatic transition in ethnic identity politics.Traditionally restricted to local or national contexts, ethnic identity politics in the 1990s became much more globally connected, expanding into increasing range of fields of social practice such as economy, law, academia, ecology and medicine. While social movements from a variety of ethnic backgrounds pushed for institutional change by appealing to the international attention markets, they were joined by a growing diversity of social actors in the re-negotiations of ethnicity and cultural difference in the public space.
Both the Summer School and the International Conference address this prominent role of ethnic identiy politics in the ongoing struggle for defining the principles and boundaries of social inclusion and political participation in the Americas with regard to the historical processes and present situations. The aim is to establish a balance of two decades of intensive and conflictive identity politics in the Americas and to identify new tendencies of the strategic use of ethnicity in politics, economics and culture.

Registration:
To attend the Summer School and the Conference, or just the Conference exclusively, please fill out the registraion forms on:
www.kompetenznetz-lateinamerika.de 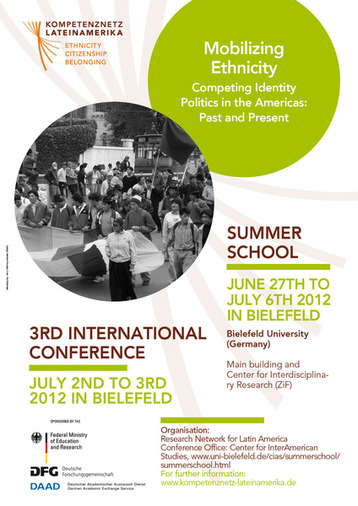