"An antagonistic approach to memory politics"

At the end of January, memory politics concerning World War II gained a new scale of attention. It was not only the media which engaged themselves in this conflict, but also politicians at the highest governmental level who entered the stage. The European Commission announced that the allied troops had freed Auschwitz, the magazine Spiegel specified this announcement in a meme that declared the US-Army as liberators of Auschwitz. On the other side, Russia's president Putin said in a speech that top Polish officials applauded Hitler’s plans to expel Jews from Europe. This statement provoked the Polish government and the media in Poland. The struggle for collective memory is not new but it gained new evidence when the European Parliament in September 2019 passed a resolution about the beginning of World War II, the responsibility of the Soviet Union, and the consequences for post-war Europe. We started a debate about this resolution and the conflict of collective memory in the form of an interview which the historian Professor Anke Hilbrenner gave us. We now continue the discussion with answers of the historian Professor Alexey Miller, Scientific Director of the Center for Studies in Cultural Memory and Symbolic Politics of the European University at Saint-Petersburg. 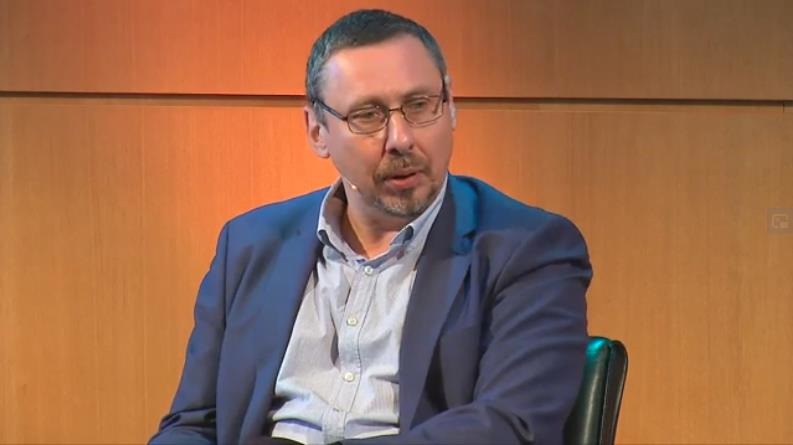 "This resolution provides no evidence"

Prof. Miller: Those people in Russia, who follow memory politics, including myself, perceived the resolution very negatively immediately after it was adopted. The resolution came to broader public attention later, particularly after Vladimir Putin joined the memory war, of which this resolution is a part of, in December 2019.

L.I.S.A.: The text of the resolution implies that because of the agreement between Hitler and Stalin, both share the same responsibility for the beginning of World War II. This is astonishing and counters all historical research on the reasons for the outbreak of World War II so far. Would you consider this to be historical revisionism or do you think this new evidence makes us to rethink the responsibilities for World War II?

Prof. Miller: This resolution provides no evidence. It is an act of what Polish promoters of this resolution call “narrative offensive”. It is not actually new – the successful effort on behalf of East European states, particularly Poland and Baltic republics, to replace the old European narrative, which was centered on Holocaust as the “crime of crimes” with the narrative of two totalitarianisms has been going on since 2004. While the old European narrative was about common responsibility, the new one is about pushing all the responsibility to the external “other”, Russia. Russia is the only country which is mentioned by name in the resolution.

"What matters are not facts, and not dialogue, but confrontation"

L.I.S.A.: The discussion around this resolution is only one component of the debate of how World War II should be remembered today. What kind of discussion do we have at the moment: Is it a discussion about historical facts and events or is the discussion more of political nature?

Prof. Miller: By the end of the 20th century, EU countries developed a “cosmopolitan” approach to memory, assuming that we turn to the past in order to have a dialogue, which allows to overcome conflict and create common narrative for common good. By now, a new understanding of memory politics, which was always there in Eastern Europe, dominates the discourse – it perceives collective memory as an extension of politics with inherent conflict – what matters are not facts, and not dialogue, but confrontation in which one side must win, and another lose. This antagonistic approach to memory politics is extremely dangerous, and we see that “old Europe” failed to resist this approach.

"The tale of two totalitarianisms"

L.I.S.A.: In Russia, President Putin claimed that Poland has a specific responsibility for the holocaust in Auschwitz, so that one might get the impression of history being a new battlefield for fierce political conflicts between nations respectively states. Why is history so important and so useful in the current political situation?

Prof. Miller: Putin did not claim that Poland has “a specific responsibility for the holocaust in Auschwitz”. He said that top Polish officials applauded Hitler’s plans to expel Jews from Europe, and that Poland was a heavily anti-Semitic state before the war. That is true. But his intervention was a part of memory wars, which go on at the moment. I would also like to call your attention to his much more balanced speech in Jerusalem, which shows that he looks for partners for dialogue, but doesn’t see a chance for such dialogue with current leaders of Poland and Baltic states. I regret he decided to personally engage in this war. But the scale of manipulation of information on the Western side is stunning. European leaders Michel, Sassoli and von der Leyen wrote in their statement about Auschwitz that “Seventy-five years ago, Allied Forces liberated the Nazi concentration camp Auschwitz-Birkenau”. It is formally correct, but it deliberately does not mention the Soviet Army as liberator of Auschwitz. Because in today’s tale of two totalitarianisms, the Soviet army can only rob, rape and occupy. Most of the Western press follows this line. As a result, Spiegel publishes a tweet that Auschwitz was liberated by Americans. And the same was claimed by the American Embassy in Denmark. If this policy continues for another ten years – most people will believe it was really the case.

So, by now, it is not a peculiarity of those East European countries who celebrate those people who personally participated in the Holocaust as their national heroes – as it is done in Baltic states and Ukraine. Poland has recently joined this club by glorification of the “zolnierze wyklienci”. Now, the tale of two totalitarianisms became part of European mainstream.

Any historical narrative is subject for revision. National narratives will look differently at the same events. All these issues can be productively discussed. But certain conditions have to be met to make such discussion possible. We have to find a way out of the current memory war. We have to leave the logic of antagonistic approach, and look for agonistic one. The agonistic approach insists on mutually respective dialogue. It is not possible today – the inertia is strong, and many people on both sides follow the logic of war. But future belongs to those, who in the midst of war, think about how to end it.