International Conference
The Complexity of Interaction along the Eurasian Steppe Zone in the First Millennium AD.

This international and interdisciplinary symposium sponsored by the Gerda Henkel Stiftung brings together leading scholars to discuss different forms of interaction between steppe polities and sedentary societies.
The principal goal of the conference is to address this topic in a diachronic and comparative way, which takes into account the vast Eurasian Steppe region by looking at well researched case studies. The interaction and complex interdependency is characterized not only between “pure nomads” and “sedentary societies” but also between different kinds of steppe polities, by the relationship between center and periphery changing constantly in space and time, by aspects of economic imbalance, asymmetric relations of power and partially constructed “otherness”.
The conference topic is framed by the time period when the modes of interaction gain new dimensions and dynamics with the expanding steppe empires of the Xiongnu in the East and the Sarmatians in the West as well as the establishment of long distance trade networks. We focus on the first Millennium AD and will not include the formation of the Mongolian world empire in the 13th century. 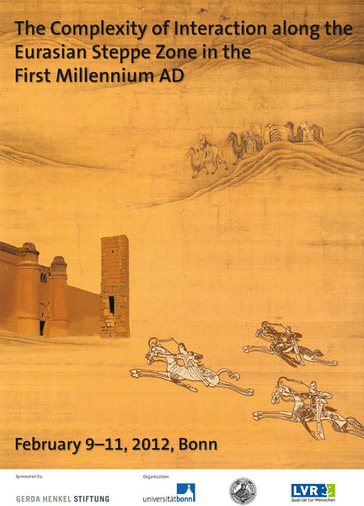