In its annual meeting 2017, the American Historical Association discussed a wide spread of subjects, regarding many topics from different angles and times. We asked the Association’s President, Prof. James Grossman, about the impression the annual meeting left on him. He also told us about the situation of the humanities in general and the role of historians in particular under the current political circumstances in the United States of America. 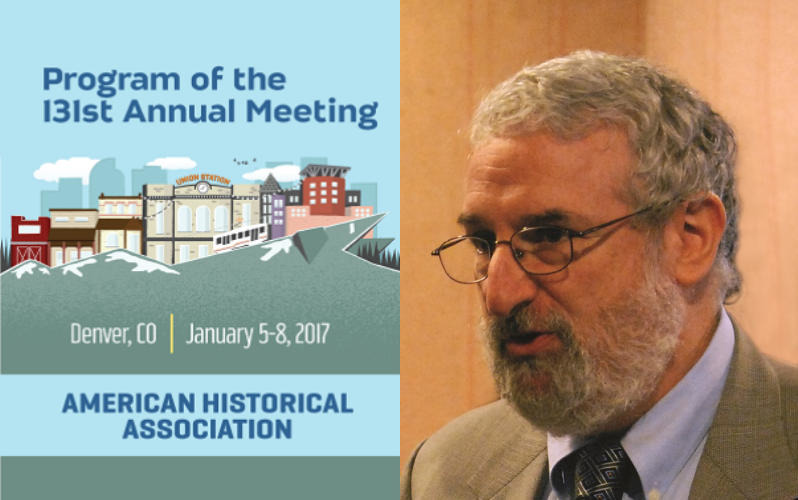 "The biggest losers would be millions of Americans"

L.I.S.A.: Professor Grossman, a few weeks ago the American Historical Association (AHA) held their annual meeting in Denver. What was the theme of the meeting? Which questions were discussed on the agenda?

Prof Grossman: The theme of our meeting was "Historical Scale: Linking Levels of Experience". The agenda was wide ranging, as befits an organization whose membership's areas of expertise and interest span the whole world and all periods of history.  Hence one can think of "scale" in terms of time and space as historical frames that facilitate linkages of all sorts, both traditional and creative.

L.I.S.A.: After being elected, Donald Trump announced the reduction of subsidies for the humanities. Which consequences do you expect for humanities on the whole and especially for the historical sciences? Did President Trump’s announcement have any bearing on the discussions at the Congress?

Prof Grossman: Trump's proposal to reduce federal funding in humanities areas did not come "after being elected." His proposed budget was released in mid-March, and it is not at all clear that the reductions that he has proposed will in fact be enacted by Congress. If the reductions do occur, we could see a substantial decline in funds available to individual historians to obtain leave time for scholarly research. Libraries and museums that preserve and make accessible the sources essential to that research would have far fewer resources for such activity. Public programming would take an even bigger hit. Millions of Americans have access to history programs in public libraries, museums, and other venues through National Endowment for the Humanities (NEH) funding. NEH supports film and radio as well.

So the biggest losers would be the millions of Americans who are neither students nor professional historians, but have an interest in history and historical thinking. Other funding that could be at risk specifically provides resources for museums and libraries. Also, funding for study of foreign languages and cultures. But again, at this point we are looking at proposals. The National Endowment for the Humanities has strong support in Congress.

"Perhaps we have become less reflective"

L.I.S.A.: To what extent has your own research been affected so far by the announced reductions?

Prof Grossman: There are as yet no reductions.

L.I.S.A.: The humanities are under pressure to justify themselves. Not only is this a phenomenon in the United States, also in Europe disciplines of the humanities are required to explain their relevance. What is the reason for this? What does it tell us about our society?

Prof Grossman: This would be a good question to pose to people who are asking humanists and other supporters of the humanities to "justify themselves." They are best positioned to explain what is in their minds, and what priorities they prefer. In the US it relates at least to some extent to economic/employment insecurity following the "Great Recession." Pressure from parents for their college-age children to study subjects that more obviously lead to lucrative employment.

It also perhaps relates to the fascination with technology that goes along with the rapid changes we have seen over the past generation. Some people have argued that humanists have become too specialized, to tied to language that is not easily accessible to a wide reading public. That is a possibility. Most likely there is not a single reason.

"Historians are frequently quoted in the media"

Prof Grossman: History is seldom seen in the US as a "science." As a discipline it remains important to public discourse, to public culture. The AHA is committed to expanding history's presence in public culture, and building on it to have a greater voice in the policy world. Our challenge is to move from a public that is interested in history as avocation, almost even recreation, to a public that recognizes the imperative of historical thinking to workplaces and policy environments. Historians are frequently quoted in the media, and we encourage our colleagues to write more for local press.

L.I.S.A.: Which research projects are you currently engaged in? What are your upcoming academic plans?

Prof Grossman: I write mostly about the humanities, liberal education, and the role of history and historical thinking in public culture. My current plans are to focus on this work at the AHA, with the larger goal of enhancing that role. We have initiatives at the undergraduate and graduate level pointing in that direction - emphasizing the extent to which our curriculum must stem from our purpose. I have also been working on and off with a colleague on a book project that lies in 19th century African American History, but that is likely to remain in the background for now.

von Raul Arias Sanchez, Dr, Ph.D. | 22.04.2019 | 18:21 Uhr
Dear Doctor Grossman. I historian and econonics specialist in Sustentable Economy of History and Culture. For very years i have a social and historical-cultural project of research a proyection of civical culture and historical memory in Costa Rica, my country, and America Latina. In this year 2019 have found the "Centro Costarricense de Memoria Histórica y Cultura Cívica". But, is necesary have a financial support for development didactics materials, web page, TV space, ilustrated comics, etc. My idea is consult to you over this project, fundamental for recuperation of historical memory and civical democratic values and projection in America Latina.
Very thnaks