The financial support of the Gerda Henkel Foundation and the Elise and Annemarie Jacobi Foundation, in accordance with the will of Mrs. Annemarie Jacobi, makes it possible for the Commission to support "graduate students of Ancient History of outstanding ability and limited financial freedom". Topics from the whole field of ancient history will be considered. 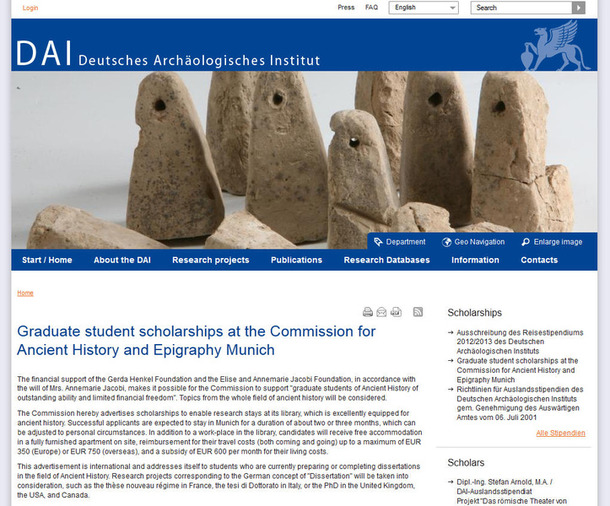 The Commission hereby advertises scholarships to enable research stays at its library, which is excellently equipped for ancient history. Successful applicants are expected to stay in Munich for a duration of about two or three months, which can be adjusted to personal circumstances. In addition to a work-place in the library, candidates will receive free accommodation in a fully furnished apartment on site, reimbursement for their travel costs (both coming and going) up to a maximum of EUR 350 (Europe) or EUR 750 (overseas), and a subsidy of EUR 600 per month for their living costs.
This advertisement is international and addresses itself to students who are currently preparing or completing dissertations in the field of Ancient History. Research projects corresponding to the German concept of "Dissertation" will be taken into consideration, such as the thèse nouveau régime in France, the tesi di Dottorato in Italy, or the PhD in the United Kingdom, the USA, and Canada.

Applications in German, English, French, Spanish or Italian are to be accompanied by the following documents:

Applications can be addressed four times a year (until 1 January, 1 April, 1 July and 1 October) to the director of the Commission. They should be submitted at least six months before the beginning of the scholarship. Please send them electronically either as an attachment or by other means (e. g. WeTransfer) to vedder@aek.dainst.de or info@aek.dainst.de, and pay attention that scans be of good quality and emails not too large. We kindly ask referees to send their references separately to the same addresses.

The Commission for Ancient History and Epigraphy of the German Archaeological Institute conducts and promotes research in the field of the Ancient History, especially in the fields of the Greek and Latin epigraphy, numismatics, papyrology, and historical topography. It publishes the journal Chiron and the Monograph series Vestigia.

During their stay in Munich, scholarship holders will have contact especially with the five permanent members of the Commission:

Christof Schuler (First Director) – Greek epigraphy and historical topography; the history of Asia Minor; ancient urbanism
Current projects: public building and finance in the Hellenistic polis; the administration of the city of Rome

Rudolf Haensch (Second Director) – Latin epigraphy and papyrology; the Roman Empire; history of religion in the light of epigraphy
Current projects: Corpus of the documents of Roman rule; inscriptions as evidence for Late Antique church building

The commission is located at 73b Amalienstrasse, opposite the Ludwig-Maximilians University. Its library at present holds about 36,000 books and currently subscribes to 170 journals. Its field of interest is the whole of ancient history, with an emphasis on Latin and Greek epigraphy, papyrology, and numismatics. The library catalogue is accessible through the internet: http://www.dainst.org/index.php?id=3505. The library is open not only to researchers of Munich university, but also to foreign researchers, who can stay in the Commission’s guest room. In addition, the libraries of the historical and archaeological institutes and the Bavarian state library are nearby and can be reached within minutes on foot. Guest lectures and colloquia take place in the Commission regularly. The institute is in the heart of Munich — 15 minutes by foot to Marienplatz — and can be easily reached by public transport.