In the historical and anthropological literature about identity formations and belonging exist diverse positions about the starting point and development of a social categorization called ethnicity or, in some regional and national historiographical and political traditions, “race”. Generally speaking, we can distinguish three groups of arguments: First, one which assumes that ethnicity is a human universal which has existed always (e.g. Gil-White, Hochman), a second one which associates the emergence of ethnicity and/or “race” with European colonialism (e.g. Quijano, Thomson) and third, one that states that ethnicity is entirely modern (e.g. Hannaford) or didn’t exist before the formation of nation states (e.g. Klinger, Müller and Zifonum). Dealing with colonial authorities and with the state is often mentioned as fostering ethnogenesis (e.g. Stark & Chance). In this conference, we aim to discuss different positions in historiography integrating visions from neighboring disciplines such as archaeology and anthropology. The discussions shall be based on case studies about a selection from colonial and precolonial societies worldwide.

The questions we want to discuss at the workshop include: Does it make sense to use ethnicity as an analytical category when studying (pre)colonial societies? Are there significant contrasts to contemporary forms of ethnicity? Does applying ethnicity as an analytical tool foster “groupism” (Brubaker) - and if so, could this be prevented by a focus on other social categorisations instead? Can we make out how different forms of colonialism influenced ethnic formations? 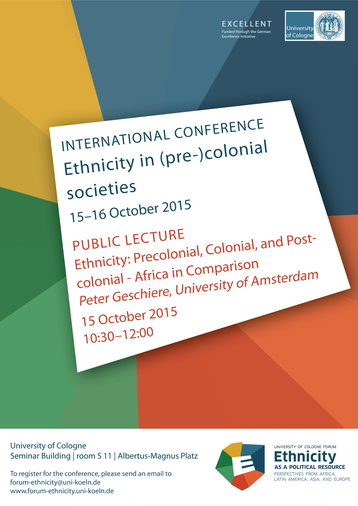