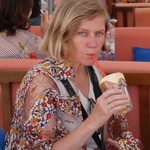 In 2012 I was working in The Temple of Hatshsepsut at Deir el-Bahari in Egypt, restoring polychrome relief in the Hathor Chapel ( XV century B.C.).

In 2011 I was working in Murato in Corsica, restoring XIV century's paintings in church .

From 1991 to 1993 I was working in Museum of Polish Army in Warsaw. In 1991 I organized The Painting Conservatory Studio in this museum.
My main conservatory works from this period:
- conservation of two XV century wooden shields covered with leather, linen canvas and painted,
- conservation of XVII century metal round shield decorated with the scene of fighting men,
- conservation of a piece of an army flag, oil painting on cotton “ Madonna of Ostra Brama “

In the years of 1981 to 1987 I was studying at Academy of Fine Arts in Warsaw, the Department of Conservation and Reconstruction of Works of Art.
In 1987 I wrote my MA theses on the conservation of a XIX century Russian icon.

conservation of paintings and wood sculptures

Warsaw University, Academy of Fine Arts
Förderbeginn I am interested in conservation projects as a partner of the Gerda Henkel Fundation