This regional study considers the transitional period between the collapse of the Palace of Knossos (end of 14th c. B.C.) and the birth of the Greek city-state (mid 7th c. B.C.) around the Mirabello Bay, in Eastern Crete. It aims at characterising the formation process of the polis in this part of the island. Based on the results from archaeological surveys and excavations conducted in the area, patterns of occupation and settlement are presented on 11 regional maps and interpreted from archaeological, historical and geographical perspectives. Significant changes and transformation in the material culture are brought to light in a holistic approach including data from religious, funerary, residential, and political contexts. The results are combined in a new synthesis which emphasizes the main traditions and innovations from which the polis arose in the Mirabello region. The second part of the volume gives a detailed and systematic presentation of the 118 archeaological places inventoried in the region, including plans, drawings and photographs. 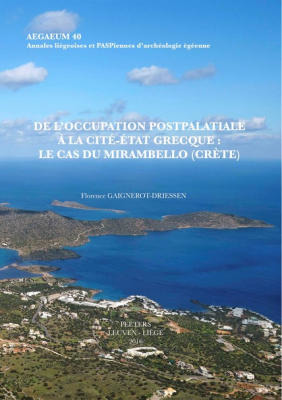