"Ahmadiyyah School ... a unique extant example of its kind from the period of the Ottoman Empire"

L.I.S.A. asked them about their work within the SoCH program and their plans for the future. The forth interview of this series is with Mr. Ahmad Masri about his project "Al-Ahmadiyyah School in Aleppo. Restoration and Rehabilitation as ‘Museum of Aleppo during the Ottoman Period’".

"I wanted to demonstrate the importance of this city in the Ottoman period."

Masri: The city Aleppo is one of the oldest populated cities in history, and is known for its hundreds of historic, religious and scholarly landmarks that testify to the heritage left behind by various states and dominions that ruled the city; these states and dominions themselves had ancient civilizations that extended over thousands of years. The last one was the Ottoman Empire, which left behind scores of mosques and madrasas (schools) and khans (hostels) and other historic sites. Aleppo is also considered the economic capital of old and modern Syria. Old Aleppo itself is a masterpiece of rare and iconic value as it holds hundreds of buildings representing various civilizations and historic eras, which made UNESCO register it on the World Heritage Site List in the year 1986.

With the unfortunate and bloody events in Syria since 2011, and with the war breaking out in Aleppo in the year 2012, especially in the heart of the city, i.e., Old Aleppo, rain of bullets, splinters and bombs fell on the city. This led to unfortunate aftermath where most buildings and archaeological sites suffered between partial to complete destruction. In my study, I chose one of these important structures, and made a restoration project of the Ahmadiyyah School and its rehabilitation as a “Museum of Aleppo during the Ottoman Period”.

There are many significant reasons for why I chose Ahmadiyyah School to be the topic of my restorative study from among many buildings of Old Aleppo. First, this structure has many values including historical, religious, social, artistic, architectural, scientific, aesthetic, spiritual and symbolic values. It is also considered to be a unique extant example of its kind from the period of the Ottoman Empire, distinguished for its design, splendor and beauty. Along with the uniqueness of its location within the fabric of the walled city, as it is located in the area of Jalum, which is one of the most important and richest neighborhoods in Aleppo. Ahmadiyyah School is in the central of the old markets of that neighborhood. Another important reason for choosing this structure for this research is because of the damage caused to the building due to the recent events and the state of negligence and deterioration and the encroachments that have taken place. The school was under renovation prior to the war and was closed before the completion of the restoration work, so I found it necessary to re-do the study and to take into account what has been achieved during restoration.

The second objective of my study was rehabilitation of the Ahmadiyyah School as a “Museum of Aleppo during the Ottoman Period” - this museum will employ the use of modern technologies to display information that is related to the subject of the museum.

This proposal was chosen for several reasons; the main reason is Aleppo being the second state during the Ottoman period after Istanbul, which was the capital of the Ottoman Empire. This is what made Aleppo an important center; and the importance of it was economic, demographic and urban because most of the convoys of land trade towards the Arabian Gulf and Iraq (also the caravan routes from the inner lands towards the Mediterranean) were passing from it. I wanted to demonstrate the importance of this city in the Ottoman period. In addition to a museum, a library and a ''Center for Ottoman Studies'' - specialized in studies of the Levant in the Ottoman Period - were included in the school's restoration project. 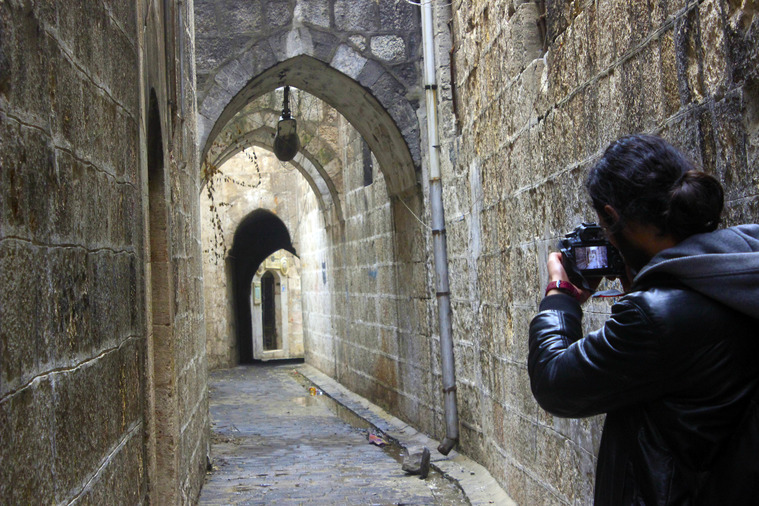 Mr. Masri working on documenting the Old city of Aleppo. The collected data was later used for his project.

"The school had moderate damages, which was unexpected considering the terrible state of the buildings near it"

Masri: This study shows the importance of a school that was once a center for science. The study also shows how this structure suffered from neglect and lack of maintenance. The school has lately regained its importance because of the restoration and adaptation project undertaken by the Waqf Library in Aleppo. However, the restoration work was not completed. The old conservation works of the school were not in line with the required specifications. Hence, several modifications were demanded to be executed by the contractor, which could not be completed because of the crisis in Syria. Therefore, in my study, an analysis was done for the restoration study to show the constructive and destructive points in it. Damages were divided into two types, ordinary architectural damages, and structural damages requiring rapid intervention and urgent preservation measures.

Despite the fact that it has suffered a lot of damage due to various reasons - including non-man-made ones due to the weather factors and negligence as well as man-made damages due to the war - the school had moderate damages, which was unexpected considering the terrible state of the buildings near it. The school's overall state was relatively good; it is well built and robust. And with the conducting of this research we now have a full restoration study with drawings of the Ahmadiyyah School. 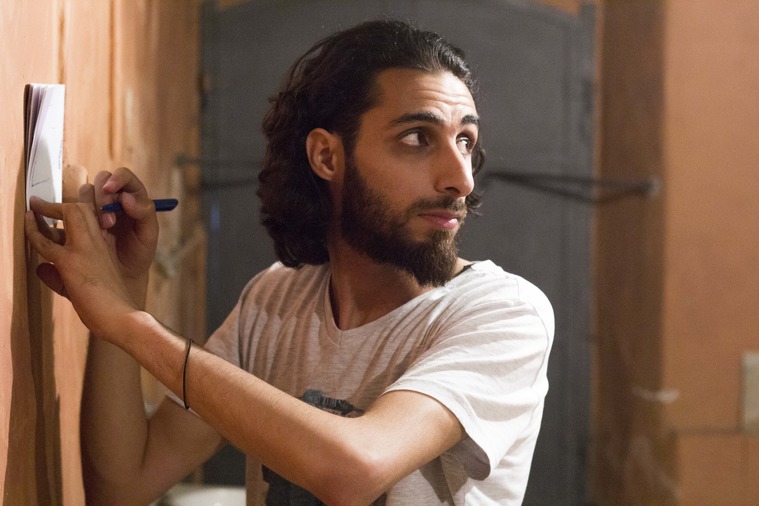 "This caused some challenges including life-threatening ones."

Masri: In 2014 before the conducting of the project, we as "The Syrian Association for Preservation of Archaeology and Heritage" did some pre research about the historical buildings in Aleppo. I went there personally to collect some data. However, the current state of the city at that time was very hazardous. This caused some challenges including life-threatening ones. However, with my colleagues we took some safety percussions and checked the places we wanted to research before going. Sometimes we could not go to some places due to the dangerous elements. Hence, the data we elicited were not sufficient.  Therefore, the absence of direct access to the building was the main challenge. After the pre research, I chose a specific research topic to work with DAI (Al-Ahmadiyyah School in Aleppo Restoration and Rehabilitation). For the research project, additionally to the elicited data, I managed to get my hands on some previous data about this school. However, the lack of reports describing the works done during the last restoration of the school was another challenge I faced. I could only rely on the visits conducted by our team "The Syrian Association for Preservation of Archaeology and Heritage" and the available images to make conclusions. Luckily, I was able to retrieve some new images and information showing damages which happened until the end of 2017, which helped in finishing the research. 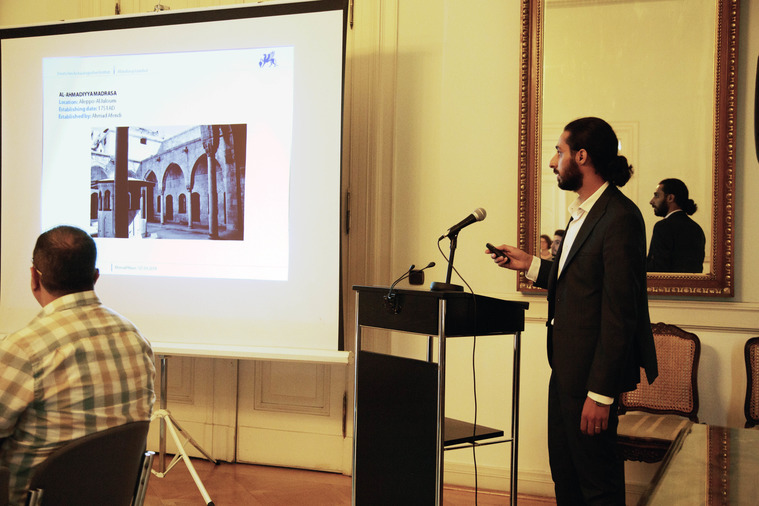 Presentation of Mr. Masri during the final event of the Stewards of Cultural Heritage program in Istanbul, September 2018

"I want to be a part of the helping hand for the restoration of my city, Aleppo"

Masri: In the short term, I hope to work in the restoration of historical buildings and continue developing my skills concerning the field. I believe working as a restorer for historical buildings will prepare me to take on expanded team leadership responsibilities in the future, especially in Syria. Additionally, I am planning to continue my academic study and start my Ph.D. in restoration. Simultaneously, I will keep conducting research about Aleppo - similar to my research with DAI - and prepare these projects to be ready to apply when there is a suitable opportunity for it. I would love to find a way to realize my research projects. In doing so, I want to be a part of the helping hand for the restoration of my city, Aleppo, in hope to return it to what it was before.

Ahmad Masri has answered the questions in written form. 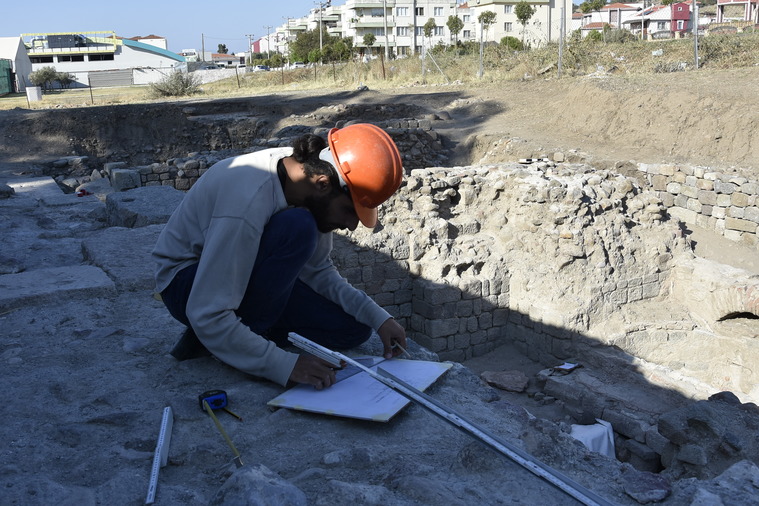