Interview with Adam Hochschild on the First World War

In these days a great plenty of monographs is published by different authors dealing with the "Great War" - in Germany usually known as the "First World War". Out of these books the new study of Adam Hochschild, "To End All Wars: A Story of Loyalty and Rebellion, 1914-1918" is in somehow different, though it neither just focuses on the history of events nor it follows a specific political agenda to change the way, how the war is remembered. Instead, Adam Hochschild traces back a specific discourse: the quarrel between war advocates and pacificists in Great Britain. We have asked Mr. Hochschild five questions about his study. He has answered our questions in written form. 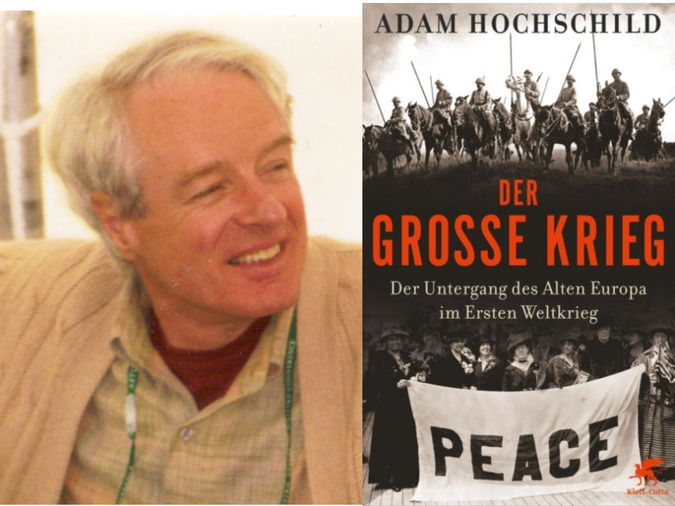 Hochschild: The German title, unfortunately, is a little misleading. My book--as I say in the Introduction--is definitely not intended to be a comprehensive history of the First World War. There are plenty of good such books already. But people usually write about the war as a military battle between two sides. I, by contrast, wanted to write about the battle between those who saw the war as a noble crusade, and those who saw it as self-destructive madness and who refused to fight. That particular struggle was most vocal and intense in Britain, and so that's the country I focused on.

L.I.S.A.: In your book you interweave the important events of the Great War with the biographies of certain people, whose destiny runs through the narrative like a red thread, and who can roughly be put into two groups, those for or against the war. Why are these two opposites important to you? And to what extent is your work a history book or rather an historical novel?

Hochschild: The book is certainly not a novel! Every event is described on the basis of eyewitness accounts; every statistic or quotation has a source; there are nearly 800 footnotes; the book as accurate as I can make it. It is definitely a history book, but not with the usual focus of books about this period. The two groups of people whose lives run through the book embody, for me, attitudes for and against the war--and their beliefs carry an echo into the militarism, and opposition to militarism, that exists in our own time. Here in the United States, I myself was deeply involved in the movement against the Vietnam War and also strongly opposed our various military interventions in Central America and our invasion of Iraq. That's one reason these struggles in 1914-1918 were important to me.

L.I.S.A.: Considering your book in terms of images, the lasting impressions are primarily cavalry and barbed wire. Juxtaposed, do they symbolize an entire epoch, or a change of epoch?

Hochschild: I think those images symbolize a change of epochs. The cavalry and been an important, often decisive, element in warfare for thousands of years; barbed wire and the machine gun were key weapons of an industrial age that rendered cavalry obsolete.

L.I.S.A.: What about the terminology used for the First World War? In Germany the 1914-1918 war was previously remembered as the First World War. At the moment it is being referred to more and more in a different way, as The Great War. How do you explain this?

Hochschild: Unfortunately I don't speak German and so have not been able to follow the discussion about the war there. It used to be referred to as the Great War in English, until, of course, the war of 1939-45 came along, causing even more death and destruction. But, even so, the First World War was still "great" in its impact and its results. It is hard to imagine the second war without the first.

L.I.S.A.: In Germany, historian Christopher Clark’s book “The Sleepwalkers” is currently making headlines. First and foremost people are prompted to address the question of war guilt again. Does this surprise you? And is the question a discussion topic in the United States as well? How is Clark’s book being received there?

Hochschild: Clark's book has gotten a good reception here. It does not surprise me that people are addressing the question of war guilt again. I have always been impressed with the way Germans have honestly and openly explored this subject where the Second World War is concerned--in contrast to Japan, for example. And it was a German historian, Fritz Fischer, who many years ago made important revelations about German and Austro-Hungarian responsibility for the start of the First World War. My own feeling, though, is that there was considerable responsibility on the Allied side as well.